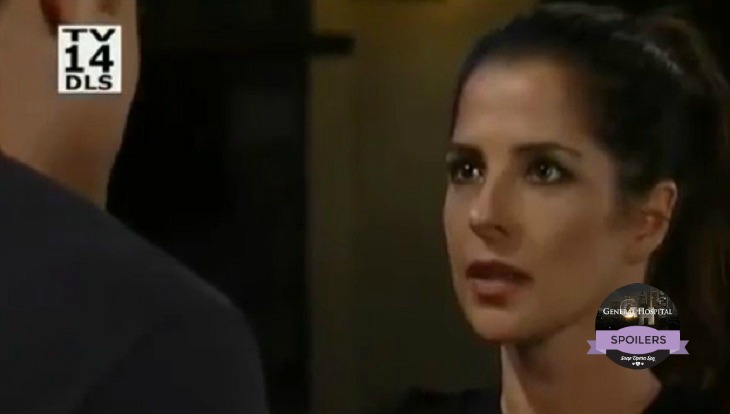 ‘General Hospital’ (GH) spoilers for Thursday, June 16 indicate that Sam and Jason get valuable info on the Nik mystery, an unexpected guest shows to the Floating Rib PCPD shindig with a request, TJ is back, and Jordan struggles to process Andre’s confession.

GH spoilers reveal that Sam might be in danger and Jason has to come to her rescue. But it also looks like Sam might find some very valuable information that could lead them to Nikolas Cassadine [Tyler Christopher] who is in England right now.

Hayden Barnes [Rebecca Budig] interrupts Curtis Ashford’s [Donnell Turner] evening at the PCPD party at The Floating Rib. Hayden wants his help with something. What is it? Naomi Dreyfus [Robin Riker] took care of the FBI, so what’s up with Hayden?

Also at the Rib is TJ Ashford [Tequan Richmond], who is back this week. Molly Lansing [Haley Pullos] is thrilled to see him and congratulates him. Is that for a school accomplishment? TJ is happy to see is Uncle Curtis there as well.
At the PCPD, Jordan Ashford [Vinessa Antoine] seems floored by the love confession from Andre Maddox [Anthony Montgomery]. She is stunned and sees this as a drastic turnaround of his earlier attitude. Will Andre admit she was right?

In England, Ava Jerome [Maura West] and Nikolas are together and he’s still going under his fake name “Carradine.” Nik tells Ava that he’s a dead man walking and she wants to know why. Is this about Jason? The Cassadines? What’s up with the Prince?

Related: 5 Characters We Want To Return To ‘GH’

What do you think GH fans? What is Nikolas doing in England with Ava? What does Sam find at the fake passport place? Share your comments below and tune in to Soap Opera Spy often for more ‘General Hospital’ spoilers and news.

‘The Young And The Restless’ Interview: Melissa Claire Egan Dishes On Chelsea And Adam’s Fate – Will ‘Chadam’ Survive The Summer?