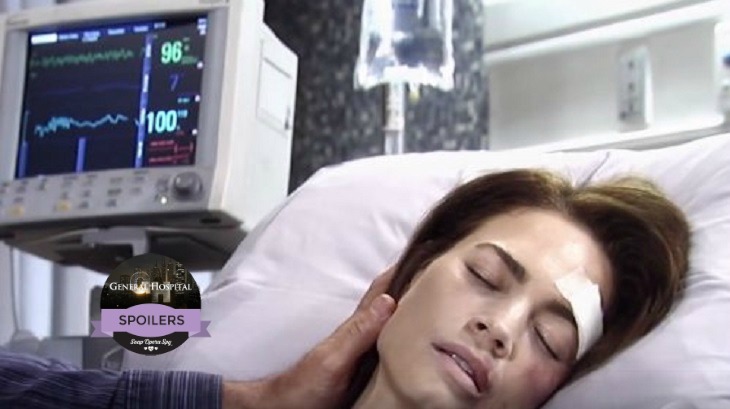 We all recently witnessed on General Hospital Nurse Elizabeth Webber (Rebecca Herbst) getting pushed down a flight of stairs and it seemed that she was gonna be okay, but suddenly things will take a turn for the worse.

In the newest ABC General Hospital promo video, spoilers reveal that “Liz’s life is in the hands of the one person who hates her guts.” You see Elizabeth taking a turn for the worst and of all things it looks like she is going to need help from her rival Hayden Barnes (Rebecca Budig).

Apparently, this is how the truth will be revealed that Elizabeth and Hayden are sisters. We all knew the truth had to come out somehow. In the video you see Franco (Roger Howarth) whispering to Elizabeth while she is sleeping that she has a secret sister. If only she would hear him or will she?

GH’s Hayden Barnes says to Franco “You need my blood, I need something from you first!” Could she be referring to the truth? I guess we will see. So will Franco have to spill the whole truth in order to save the woman he loves?

Also in the promo video it shows them wheeling Elizabeth out of her room in her hospital bed and Doctor Griffin Munro (Matt Cohen) telling Franco they have a serous problem. Could it be that Liz had to have surgery, then came in need of blood? Well that’s one possibility!

Would you GH fans like to see the truth come out this way and Hayden have to save her sister? It would be nice if it caused them to form a bond and get over their animosity towards one another. Some fans enjoy their little cat fights, but as sisters I’m sure they would still be some of that.

So GH fans, you better fasten your seat belts cause it looks like we are gonna be on one crazy ride this week, where lives are hanging by a thread and secrets could be revealed. Don’t forget to tune in to ABC’s General Hospital! This is a week you don’t want to miss.