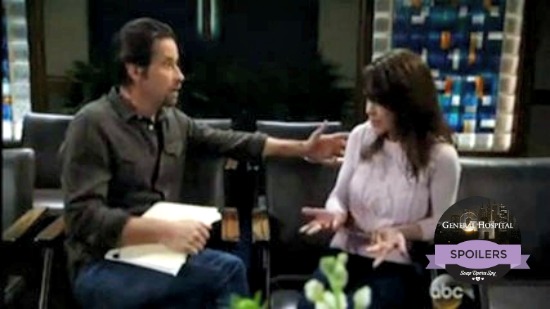 ‘General Hospital’ (GH) spoilers tease that the relationship between Nina Clay [Michelle Stafford] and Franco [Roger Howarth] may soon be on the rocks and it’s all about baby mama drama. Nina desperately wants a family, but Franco clearly does not.

He was stunned and a bit angry when Nina tried to push forward with an adoption without his agreement. And next we’ll see Nina trying to get her fertility checked so she can birth a baby of her own since Maxie Jones [Kirsten Storms] suspects Nina’s infertility assumption may be wrong.

But will Nina get the baby green light and try to get Franco to knock her up without his knowledge? Franco and Nina are headed to a major showdown and Liz Webber [Rebecca Herbst] is at the core of the matter – but Ava Jerome [Maura West] is part of it too.

Franco just came back from a visit to Philadelphia to see Liz and take Jake Spencer [James Nigbor] a new bike. Nina sees that Franco is playing pseudo-dad to Jake by stepping up for Liz. Plus, if Nina finds out that Franco called Liz to vent his fears about Kiki Jerome [Hayley Erin], she’ll fume even more.

Franco has been very attentive to other women’s children – namely Kiki and Jake – while simultaneously telling Nina he doesn’t want to be a dad. Nina sees this as major hypocrisy on his part and she’s not entirely wrong.

But as Franco will point out, those aren’t his kids – he’s very concerned about passing on screwed up genetics to any biological child he might have with Nina. Franco thinks his DNA is bad since his mom is nuts and so was he – he’s right to be worried.

Will Nina give Franco an ultimatum to get her pregnant or they’re done? Nina and Franco have been a solid couple for a while, but we knew they would face hiccups. The one saving grace for them could be if Nina finds out that Kiki is her bio-kid.

GH fans have long theorized that Kiki was given to Ava by Madeline Reeves [Donna Mills] and that she’s really Nina and Silas Clay’s [Michael Easton] kid. That remains to be seen, but no way will Nina’s thirst for a kid be satisfied until she has one.

Franco truly loves Nina but this kid thing could be a deal breaker that splits them. Will Nina confronting Franco about Liz allow them to clear the air and grow closer – or could it push them to the breaking point?

And is Franco’s interest in Liz solely that of a new BFF? Admittedly, Rebecca Herbst and Roger Howarth have great chemistry, but either of them could have chemistry with a lamp post, since they are both very talented.

It would be nice to see Liz get a new romance in her life, but not by stealing someone else’s man again. Surely she learned her lesson with the Jake Doe-Jason Morgan [Billy Miller] debacle and won’t get with any other woman’s man again…

Also, it would be tough for Liz to accept that she’s interested in a romance with the reformed serial killer. But since she was into Jason who was a killer in his Stone Cold days, it’s not a huge leap. Granted Franco took pleasure in killing while Jason did not, Franco is cured now.

What do you think GH fans? Are Nina and Franco headed for a split? Will Friz (Franco + Liz) be the new romance we’re all shipping in coming days? Share your comments below on Franco and Nina’s baby dilemma and check back with Soap Opera Spy often for more ‘General Hospital’ spoilers and news.

‘Days of Our Lives’ News: Performer of the Week – Vivian Jovanni