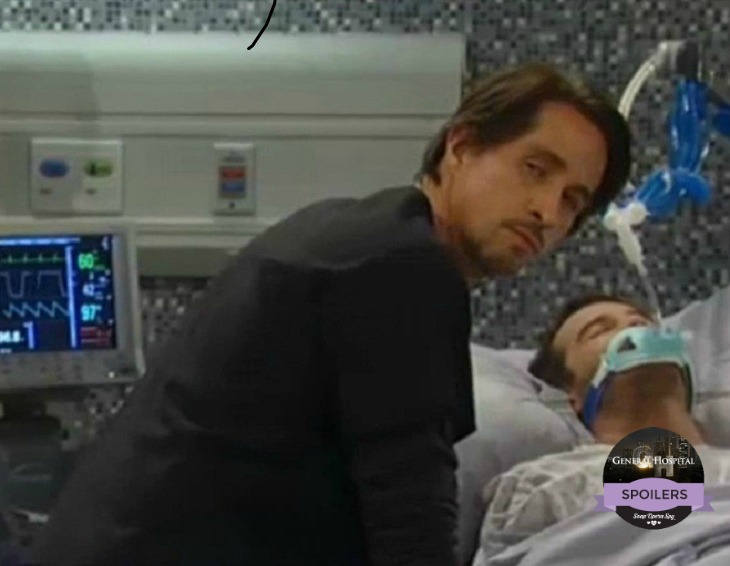 ‘General Hospital’ (GH) spoilers hint that Dr Hamilton Finn [Michael Easton] has been backed into a corner. With two patients under his care dead and now the attack on Lucas Jones [Ryan Carnes], a number of people are giving Finn the side-eye and Carly Corinthos [Laura Wright] is coming for him.

Dr Griffin Munro [Matt Cohen] has suspicions, simply based on coincidence and timing, but Dr Liesl Obrecht [Kathleen Gati] is more than suspicious. She’s ready to make outright accusations, particularly since Dr O has been poking into Finn’s track record in prior hospitals where he worked.

It’s not enough that Obrecht suspects Finn and lets him know she’s on to him, but Dr O also begins a campaign of accusations and tells Carly her suspicions. Dr O reveals to Carly that Finn has a dodgy past and implies that he’s also got a drug habit. That definitely gets Carly’s attention.

Carly’s knee-jerk, as always, is to defend her friends and she considers Finn a friend. Carly tries to shut down Dr O as making baseless accusations but then Monica Quartermaine [Leslie Charleson] echoes that she’s also concerned and says the police are investigating the Lucas incident.

Carly confronts Finn, but it’s not what the lizard-loving doctor expects. Everyone is coming at Finn from an accusatory posture, but Carly is coming from a place of genuine concern. She truly doesn’t believe that he hurt her brother and wants Finn to stand up for himself.

Given the incident where Carly found Finn passed out in his MetroCourt hotel room with a needle in his arm, she has some ammo that could fuel the fire of an investigation into Finn’s activities. But Carly wouldn’t rat out a friend, but she does want the truth.

Carly has been angling to dig into Finn’s weird life and secrets since she first met him. So this is a perfect opportunity for Carly to get closer and find out what she wants to know, even though the backdrop is the tragedy related to her brother.

Finn admits he’s been hiding something from her and everyone else ever since he came to Port Charles, but that’s as far as he’ll go. Finn refuses to open up to Carly further than that. So will Carly stop at the refusal and let things go? No way!

Finn has no idea how obstinate and pushy Carly can be when it comes to her friends. Once Carly brings you into the fold, she’ll go all out to fight for you but, in this case, Carly needs ammunition to do battle on his behalf. Will Carly push Finn hard enough to get him to spill his guts?

What do you think GH fans? What is Finn’s big secret? And does the real GH patient killer know Finn’s secret and is using it to set up the oddball doc? Share your comments below and tune in to Soap Opera Spy often for more ‘General Hospital’ spoilers and news.

‘The Bold And The Beautiful’ Weekly Spoilers May 30 – June 3: Thomas And Ridge Face Off Over Douglas – Ridge Refuses To Let Him See Baby