‘General Hospital’ Spoilers: Bobbie Suspicious of Nelle! Will She Uncover Her Master Plan Against Carly In Time? 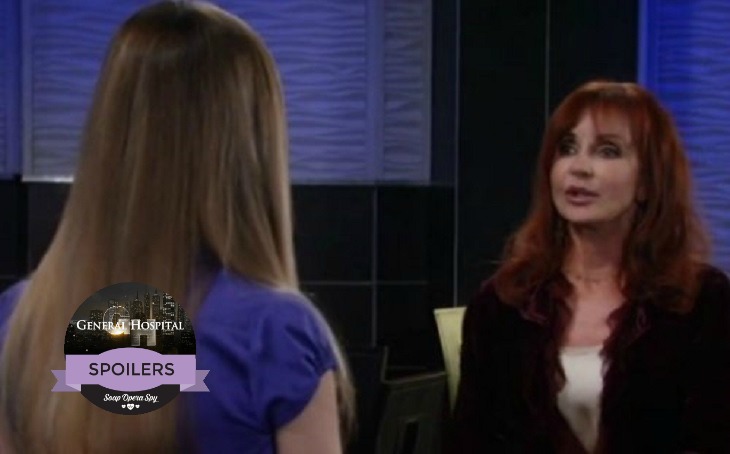 ‘General Hospital’ spoilers are teasing that in the coming week, Bobbie Spencer’s (Jacklyn Zeman) suspicions regarding Nelle’s (Chloe Lanier) intentions towards the Corinthos family will continue to grow. This week, Bobbie found a pill in Sonny’s (Maurice Benard) bedroom which only peaked Bobbie’s curiosity as to why one of Nelle’s pills would be in there to begin with.

Nelle is confronted by Carly’s mother and is put on the spot and interrogated as to what she is up to. Bobbie and Nelle have not hit it off from day one and it doesn’t appear that has changed or will change anytime soon.

Related: What Was Your Least Favorite GH Storyline In 2016? VOTE!

Bobbie continues to be weary of Nelle and still does not buy her “gracious” intentions towards Carly and her family.

Perhaps, Bobbie recognizes Nelle’s behavior as to the way Carly (Laura Wright) was when she first came to Port Charles. A deja-vu moment for Bobbie? Could be! As many GH viewers will remember, Carly befriended Bobbie in the same way Nelle has befriended Carly all the while—a secret agenda is unfolding behind the scenes.

In the recent episodes of General Hospital, we saw Nelle with a baby rattler with the name “Caroline” engraved on it—could this name be associated with Carly Corinthos since she was once called Caroline as well? It would certainly be a coincidence if not.

Based on the scraps that GH fans have been thrown so far as to what is unfolding, it is entirely possible that Nelle is Carly’s long-lost daughter that she never knew existed. But how is this possible? Could the father of Nelle be the man that Caroline was once involved with when she lived in Florida before she moved to Port Charles?

We noticed on many occasions Carly has mentioned that she was once involved with an older man who took advantage of her when she was very young but there was no mention of there ever being a child. Stay tuned to see what shocking secrets are to come—Nelle will continue to drop hints to Carly as well as GH viewers as to what her real problem is with Carly. Stay tuned to General Hospital weekdays on ABC.

‘The Bold and the Beautiful’ Spoilers: Liam Rants About Eric’s Demands, Steffy Won’t Back Down – Brooke’s Curiosity Unsettles Ridge