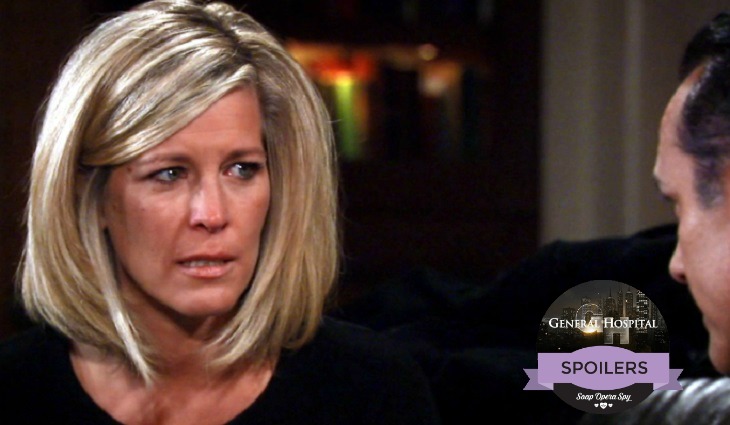 General Hospital (GH)  spoilers for Tuesday, January 3, 2017 begin with Samantha (Kelly Monaco) and Jason Morgan (Billy Miller) arriving at Alexis Davis’ (Nancy Lee Grahn) house telling her they need to talk now.  Sam appears to be angry with her mother, did she and Jason discover that Julian Jerome (William DeVry) is living with her?

On New Year’s Eve, Nina Reeves (Michelle Stafford) and Valentin Cassadine (James Patrick Stuart) officially marry in order to help him keep custody of his daughter, Charlotte (Scarlett Fernandez); sources reveal Nina and Valentin both agree that they don’t regret what happened, and it is all for Charlotte’s sake.  How will Lulu Falconeri (Emme Rylan) react when she finds out what they have done?

General Hospital’s Lulu has always been a tough person who has endured a lot, but when it comes to her daughter, Charlotte she seems to be a bit out of control and over possessive.  Her husband Dante Falconeri (Dominic Zamprogna) offers her a bit of advice.  He tells her that fighting with Nina is not going to affect the custody case in a positive way; he couldn’t be more right!

Franco Baldwin (Roger Howarth) has been grateful that Elizabeth Webber (Rebecca Herbst) has been supporting him, but spoilers reveal he begins to question her loyalty.  He insists that he did not kill Tom Baker (Don Harvey) and asks her if she believes him.  Will Liz stand by her man, or admit that she doesn’t fully trust him?

When the clock struck midnight, Carly Corinthos (Laura Wright) went against her better judgment and rushed home to be with her husband, Sonny (Maurice Benard) to ring in the new year together.  Sonny was thrilled to see her, but the happiness wore off quickly and Carly is already back to arguing with him about his lifestyle and business.  Carly tells him that his business is still his business but she cannot risk losing someone else she loves.  Was it a mistake for her to come home to him?

Be sure to tune into ABC’s General Hospital (GH) on Monday, January 2, 2017 to catch up on all these stories and more.  Check Soap Opera Spy often for updates, news, rumors and spoilers!

‘The Young and the Restless’ Spoilers: Nick and Chelsea To Remain Friends – Chick Option Pushed to 2017