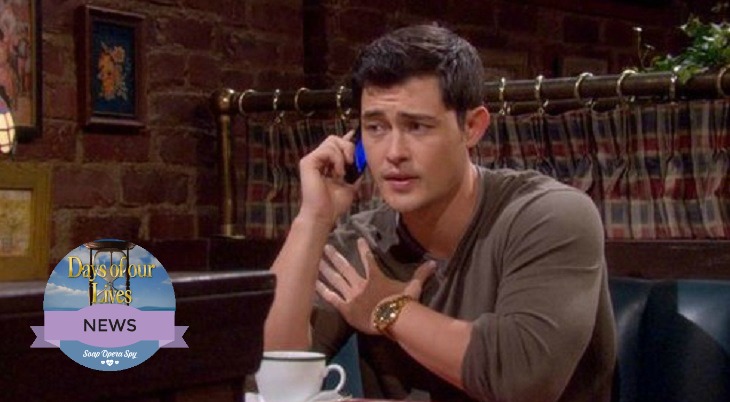 ‘Days of Our Lives’ Christopher Sean [Paul Norita] shared his opinion recently about the possibility that Will Horton [previously Guy Wilson] could return to Salem. The actor thinks things could get interesting if Will were to rise from the dead.

New Year’s Eve brings out the romance in everyone, and Paul and Sonny are no exception. The once-upon-a-time couple will ring in 2017 with a kiss. But it’s going to take a lot more than a kiss to get this couple back to track. And if Will returns to town things would get even more complicated.

Christopher Sean was interviewed recently by TV Insider and asked his thoughts on Will returning home. “I absolutely love the idea of bringing Will back,” Sean revealed.

The actor pointed out that Will and Sonny’s wedding made groundbreaking soap opera history. It doesn’t hurt that Will Horton is a legacy character with deep ties to Salem.

Guy Wilson portrayed Will when Sonny’s husband was murdered by the Salem Strangler. If Will isn’t dead and headed home, would Guy resume the role? Previous reports have indicated that previous portrayer Chandler Massey may have been approached about reprising the role.

In February 2016 Massey’s former publicist Jeffrey Ballard addressed the buzz, stating he could neither confirm nor deny the rumor about TPTB contacting Massey. “I guess you will all have to keep watching!” Ballard posted on his Facebook page.

Keeping in mind that ‘DOOL’ tapes approximately six months in advance, this would have given Massey’s new representation plenty of time to negotiate a new contract for the actor. Of course, the question remains, how will TPTB at ‘Days of Our Lives’ explain Will suddenly showing up in Salem?

There’s always the possibility that Will had a look-a-like who was killed by Ben Rogers [Robert Scott Wilson] as Sonny’s husband was held hostage by some unknown person for an unknown reason. Anything can be explained by a good writing team.

‘Days of Our Lives’ fans remember that a very married Will Horton seduced Paul into bed. Will, a freelance writer, was assigned to write a story on the ballplayer. Will couldn’t resist his desires and betrayed Sonny by bedding Paul.

Christopher Sean is on board for the return of Will Horton. Are ‘DOOL’ fans ready? It would be interesting to see a storyline involving Wills return to Salem would unfold.

‘General Hospital’ Spoilers: Bobbie Suspicious of Nelle! Will She Uncover Her Master Plan Against Carly In Time?

‘The Young and the Restless’ Spoilers: New Year Brings New Beginnings On Y&R – Embrace What 2017 Can Offer

Days of Our Lives Spoilers: Judi Evans Opens Up About Her Salem Exit – Missing…