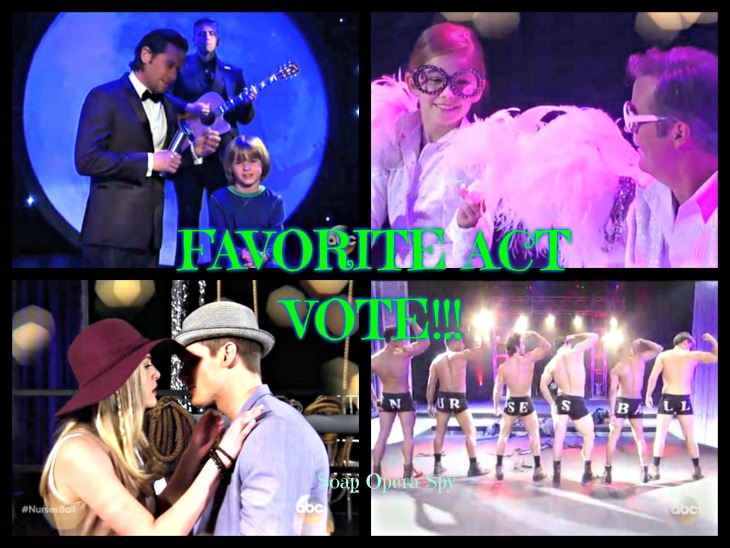 ‘General Hospital’ (GH) nurses and residents alike get to showcase their talents every year at the Nurses Ball. From duets to comedy acts to stripteases, nothing is off the table when it comes to raising that money. This year was no different, in that regard and there were so many entertaining acts! Not all performances were created equally, however, so it’s time to battle it out- which Nurses Ball performance stole the show?!

This budding relationship performed “Stitches” by Shawn Mendes. First things first, Watkins can SING! He started the song off fantastic from the beginning. When Kiki jumped in half way through the song, she looked adorable and flirty. The best part of this act was watching the chemistry bubble over between Kiki and Dillon. Sorry Morgan! (Bryan Allen Craig)).

Little Jake was scheduled to sing along to “This Changes Everything.” It was supposed to be just him and a guitarist in the background. The excitement proved to be too much, and he froze up. Franco jumped on stage and broke him out of his trance with a few “quack, quacks” and a nudge to the shoulder. Once the performance began so did the water works. The sweet song, Jakes tiny voice, and a papa bear Franco being involved just enough to look chivalrous but not overbearing. It was tearfully perfect.

Fun, fun, fun about sums up Emma and Ned’s performance of Elton John’s “Don’t Go Breaking My Heart.” Everything about the fantastic performance was set up to entertain. Emma was dressed to the nine in a 70s inspired outfit along with wings and glass. Not only did she sound fantastic, but she and Ned sang playfully together very well.

Vote NOW and let us know what act was the best this year! Was it one of the two adorable kiddos, maybe a flirty duo or was it Milo and his sexy men?! Also, make sure you share your comments below and let us know what you think! As always, come back to Soap Opera Spy every day for more ‘General Hospital’ spoilers plus interviews, news and more.