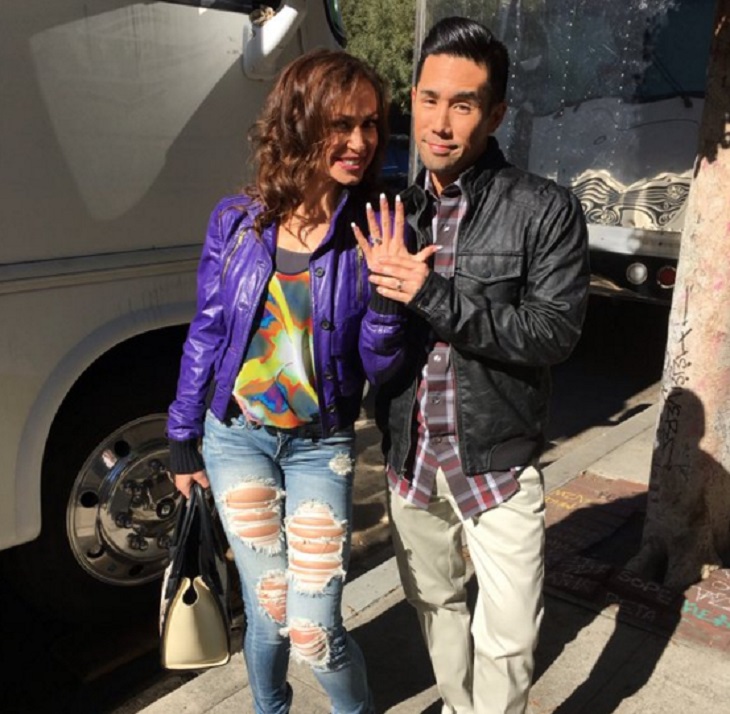 “General Hospital” fans will get to see a different side of Parry Shen [Brad Cooper] in “Swing State” – which is currently filming. That would explain why “GH” fans haven’t seen very much of Brad since he and Rosalie Martinez [Linda Elena Tovar] shocked Dr. Lucas Jones [Ryan Carnes] with the news – they’re married!

The character Parry portrays – Ryan Pollard – in the big screen political comedy is also married. “Dancing with the Stars” alum Karina Smirnoff has been cast as Lucy Pollard. Shen tweeted a snapshot from the set of “Swing State” just the other day.

In the photo the on-screen couple are showing off their wedding bands. Parry Shen captioned the tweet, “I’d like to intro ya’ll to my sweet & wonderful wifey on the film SWING STATE — @Karina_Smirnoff.”

The plot of “Swing State” as described on the movie’s Facebook page: “What would happen if a music DJ in serious debt had a chance to make some money as right-wing talk show host? Follow Ethan in his hilarious misadventures!” No trailer of the movie is available yet.

This should be interesting! A political satire may be just what Parry Shen needs to show off his dry wit and comedic side. There isn’t much information available yet about the movie except for the brief description and the cast information. The website for “Swing State” merely states “Coming Soon.”

Jonathan Sheldon’s – the writer and director – IMDb page – gives a bit more information about the film. It is billed as a “romantic comedy set inside a radio station in Seattle during a highly contentious election.”

“GH” fans and “Dancing with the Stars” fans you will just need to check back with Soap Opera Spy to find out more as the details about “Swing State” are revealed.