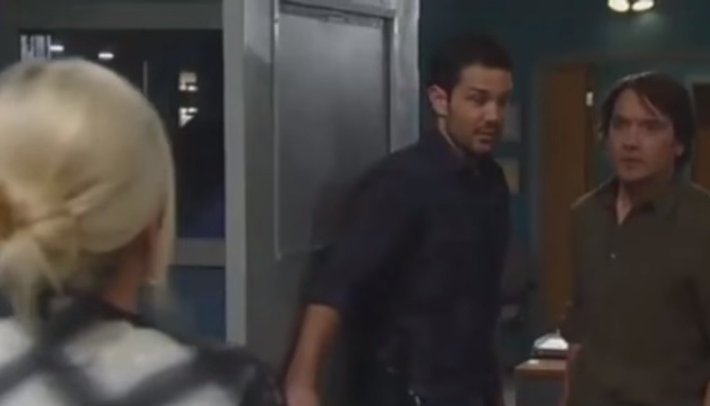 ‘General Hospital’ spoilers indicate that the investigation into Paul is forced in a new direction on Thursday, January 14 and the manhunt for Johnny will heat up. Check out these spoilers to see what will happen with Lulu, Valerie, Dante, Nathan, Maxie and more.

First, Maxie Jones [Kirsten Storms] comes clean to Nathan West [Ryan Paevey] about Johnny Zacchara [Brandon Barash]. She’s smart to do that and then Nathan calls Dante Falconeri [Dominic Zamprogna] in to hear it as well.

Maxie is worried about Lulu Spencer’s [Emme Rylan] antics with Johnny ruining her marriage to Dante, so if Maxie cares about her BFF, she’ll leave Lulu out of it. Of course, that lie of omission may come back to bite Maxie later if she doesn’t give full disclosure.

Johnny hops a ride with Valerie Spencer [Brytni Sarpi] who’s being a good Samaritan and tells her he’s leaving Port Charles after he takes care of something. Too bad she’s the something he’s taking care of – this errand of kindness turns into a nightmare for Val.

Good guy Craig turns into scary Johnny and he tells her she’s in big trouble. Looks like Johnny might kidnap Valerie and leave her someplace that that puts her in mortal danger. Will what Johnny says as he’s threatening her make it clear to Valerie that Lulu is behind all of this?

Meanwhile Lulu is with Olivia Falconeri [Lisa LoCicero] talking about Dante and her mother-in-law gives her a piece of her mind. Is Olivia’s tongue lashing motivated by Valerie calling her a hypocrite? Olivia tells Lulu that her marriage was not perfect or else Valerie wouldn’t have had a chance.

Olivia will point out this was not all Valerie’s fault and there must have been other issues. This may inspire some regret in Lulu over shunting all the blame to Valerie and she feels bad about siccing Johnny on her cousin, but it’s too late.

Over at Sabrina Santiago’s [Teresa Castillo] place, someone rattles the knob and Jordan Ashford [Vinessa Antoine] and Anna Devane [Finola Hughes] pull their guns. Is it Felix DuBois [Marc Samuel]? Or is it Michael Quartermaine [Chad Duell]? Mikey tells someone that Sabrina left town.

This means that Jordan and Anna need a new plan – they rope in Robert Scorpio [Tristan Rogers] to help. Also dealing with disappointment is Julian Jerome [William deVry]. He and Alexis Davis [Nancy Lee Grahn] stop by the Crimson office hoping for terrible news.

Instead they find things ramping up, not shutting down – and Julian gets the news that the green issue of Crimson was a hit. Looks like he needs another tax strategy because Nina Clay [Michelle Stafford] and her crew killed it!

Don’t miss a moment of the Thursday, January 14 GH then come back to Soap Opera Spy for more ‘General Hospital’ spoilers and news.