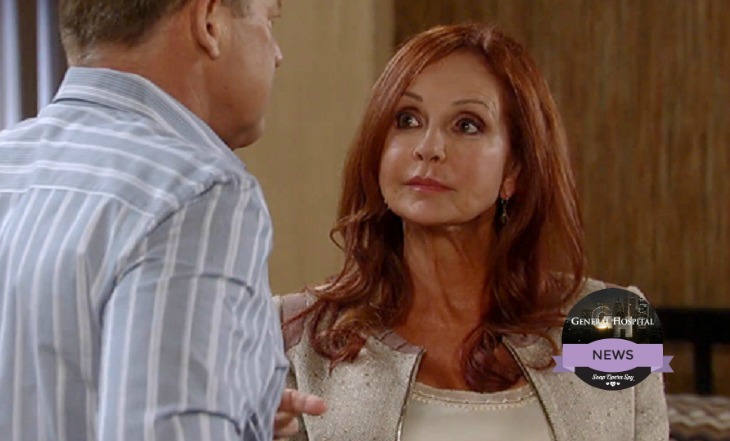 Exciting news General Hospital fans, ‘GH‘ spoilers tease that Jackie Zeman is making a return for the Nurses’ Ball as Bobbie Spencer, as confirmed by the actress. Today Zeman announced her return on twitter writing “Shooting for the #nursesball #GH wahoo! @GeneralHospital.”

Her announcement received several positive responses one in particular from a fan who said “@JackieZeman @GeneralHospital Dance, baby, DANCE!” Zeman responded “@Rowaenthe @GeneralHospital Haha! You’ve got that right Girlfriend I’m dancing as fast as I can! #goodtimes”

Related: Scotty And Andre Team Up To Keep Anna Out Of Pentonville For Carlos Shooting

She must be filled with joy considering we recently did an interview with her where though she was uncertain if Bobbie will return soon, she was more than open to returning to the ABC sudser. In our fantastic interview she said “I just turned on GH. And saw a scene with Tracy (Jane Elliott) in the hospital. I hear she has worms in her head? Since she is my sis-in-law I’m wondering if Bobbie will go to visit.” Clearly we no longer have to wonder.

The Nurses’ Ball is slated to air next month and Zeman joins the rest of fan favorites returning including Kimberly McCullough (Robin), Drew Cheetwood (Milo) and Lynn Herring (Lucy Coe). The Ball as teased by several of her co-stars is said to be filled with several awesome performances. In regards to her tweet it seems as if Bobbie will be performing. As for how long Zeman’s return is slated for there is no news, but since the actress is on recurring it could possibly be just for the Nurses’ Ball event.

Zeman is also busy elsewhere, she will begin shooting new episodes as Sofia Madison for “The Bay: The Series” soon. As per a conversation with her, the scripts for the new season would be given out this month, to which she is looking forward to. So fans are you excited to see Zeman’s return? Would you like to see her return full time to the show?