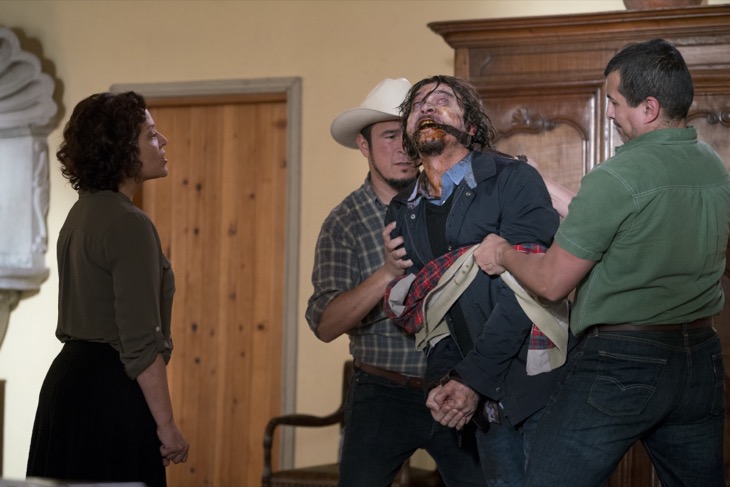 ‘Fear the Walking Dead’ spoilers for the mid-season premiere in August show that the first episode centers on Nick Clark [Frank Dillane] and his struggles now that he decided to walk away from his family and into the horde of coming walkers.

But has Celia’s [Marlene Forte] strange take on the walkers not being dead (or even undead) and the next phase for humanity affected Nick’s ability to function in the world? We’ve already seen since the plane crash scene at the beach that Nick views the infected differently.

Since he figured out he can walk among them covered in guts and gore, he feels some sort of strange kinship with them. As a heroin addict, Nick used to shamble around like the walking dead himself among “normal” people back before the apocalypse kicked off.

That seems to be why he’s adjusted so rapidly – and efficiently – to these strange times than has the rest of the family. He already felt a tie to the walkers and then it felt like Celia clarified for him why he felt the connection and showed him that she did too.

Celia made it clear that she doesn’t see the transition to becoming a walker as an end or a finality. She sees it as the beginning of a new and different life. That’s why she snapped when Victor Strand [Colman Domingo] put a knife into Thomas Abigail’s [Dougray Scott] brain.

Celia truly believes that sickness didn’t kill Thomas – Strand did. That’s why she kept all the walkers corralled in the stables and was feeding them. That’s also why, incredibly, when Madison Clark [Kim Dickens] locked Celia in the pen with them, Celia didn’t protest or try to escape.

Celia felt like she was moving on to another form of life. Part of this may be cultural – FTWD showrunners have talked at length about how Mexican culture views death differently than do others and don’t see death as final and that they tried to reflect that in their writing.

Remember, Nick and Celia clicked right away as soon as he got to the Abigail estate. So when Celia offered an explanation of what the walkers meant to her, it resonated with Nick. And, to be fair, in the FTWD world, they don’t know what happens when the living die and transition to undead.

Rising from the dead has a definite Judeo-Christian resonance, although there were never zombies like that roaming the New Testament. But still there are messages there. We don’t know what goes on in their brains, at least not in the world of ‘Fear the Walking Dead.’

Over in ‘The Walking Dead’ canon, the CDC scientists explained that only the most primal part of the brain stem comes back to life when the diseased perish then reanimate so that means they likely have no emotion and no humanity – just basic functions.

But in the world of ‘Fear the Walking Dead’ no such science has been explained to them, so Celia’s more esoteric explanation seems plausible, at least to Nick, whose mind is open. Celia’s loss hit Nick hard because he saw her as a mother figure who accepted and saw good in him.

In contrast, his own mother Madison sees him as a junkie loser constantly at risk of disappointing her. When the Abigail estate burned, Nick lost the first place in a long time where he felt comfortable. So it was understandable when he walked away from his family.

However, as we will see when Season 2 picks back up in August, what seemed like a beautiful lesson in the nature of the intransigence of life could put Nick at risk when he finds out that attitude does not work elsewhere in the world.

What do you think fans of ‘Fear the Walking Dead’? Do you think there is life beyond death for the infected? Do you see Celia’s side of things? Or is Celia’s outlook dangerous and will put Nick’s life at risk as he heads out on his own?

Share your comments below and check back often for more ‘Fear the Walking Dead’ spoilers and news.

‘The Young And The Restless’ Spoilers Monday May 30: Luca Pushes Summer to Speak to the Press – Victoria on the Warpath – Billy Requests Info from Natalie