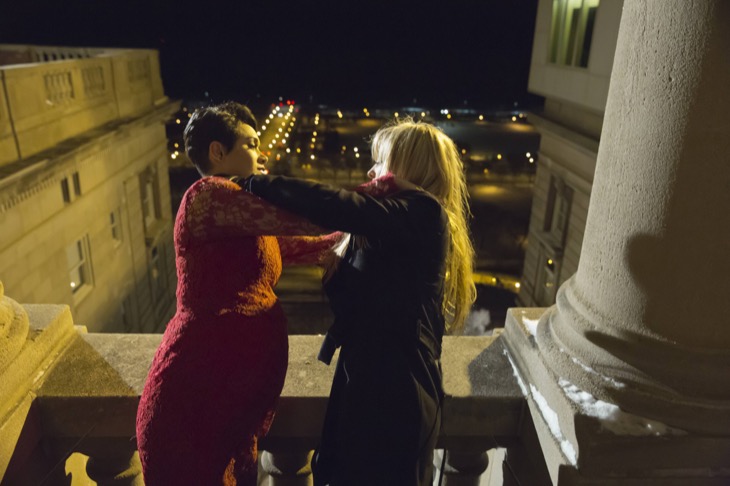 “Empire” just lost a major character on the Season 2 finale, but the question on the fans minds—who is it? Showrunner Ilene Chaiken teases that it looks like someone did die, but the question is, who was it? According to E! News, Trai Byers, Grace Gealey, and Terrance Howard weighs in and tell who they think died, and how it could affect Season 3.

Ta’Rhonda Jones who portrays Cookie’s (Taraji P. Henson) know it all assistant isn’t sure who died. She explained that her mother called her demanding to know who fell off the ledge, and she told her “I don’t even know.” She said she’s on the edge like the fans and is dying to know who lived and who died.

Terrance Howard explained that he thought the storyline would be more powerful if Anika died. He said the fallout that Rhonda would face would make an amazing Season 3.

Trai Byer isn’t sure who fell and thinks whoever did die; it will be a focal point for most of Season 3. Jones wondered if they both could survive, but based on Andre (Trai Byers) screams, it seems as if someone did in fact fall or something tragic happened.

“Maybe Andrew screamed ‘NOOOO’ because one of their wigs fell off, I don’t know,” Jones teased.

One thing the whole cast agreed on was Season 3 will be must watch TV, if for no other reason to see who lives and who dies. The general thought was it didn’t matter if Anika or Rhonda died, the fallout from both would be huge, and create a major conflict for many people on the show.

“Empire” fans, you tell Soap Opera Spy who you think fell off the ledge—Anika or Rhonda? Don’t forget to come back later for more “Empire” spoilers, news, and casting updates.