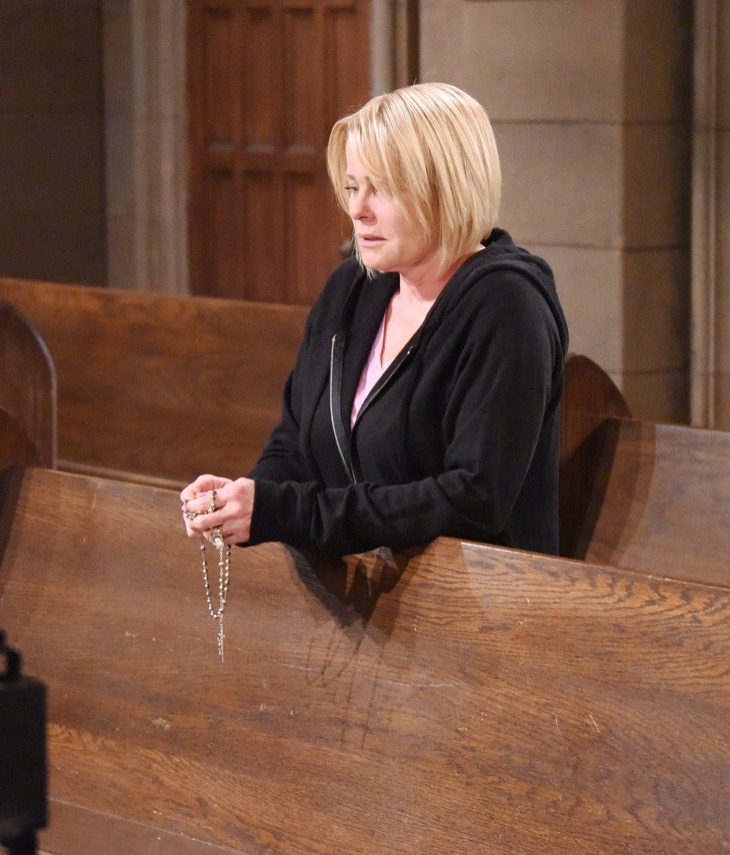 Bad news arrives this week for Adrienne (Judi Evans), who’s been hospitalized after a sudden collapse on, “Days of Our Lives.” We don’t yet know what her diagnosis is, but it can’t be good given the fact that she has the BRCA gene that’s linked to increased risk for breast cancer.

A while back it seemed that the writers were going to explore this storyline with Adrienne. She discussed the issue with her sister-in-law Kayla (Mary Beth Evans) and allowed the doctor to talk her into being tested.

Adrienne was relieved when she received negative test results, but then apparently dropped the ball on regular testing. Who can blame her, none of us want to confront our worst fears over and over again.

Related: DOOL Alum Jensen Ackles Shares News of the Birth of His Twins

This week the perky mother of five found herself in the middle of a tumultuous wedding ceremony that ended with two men fighting over her. Consequently, her son Sonny (Freddie Smith) locked all three into a hotel room in an effort to force a choice.

Then, just as she was about to deliver her decision, Adrienne keeled over! Cut to the hospital, where Kayla insisted that Adrienne undergoing testing, including a mammogram.

Unfortunately for Adrienne, spoilers now indicate that she will receive the worst possible news.

Who will come through for Adrienne in her time of darkness?

When she finally announced her choice from her hospital bed, she chose her groom-to-be Lucas (Bryan Dattilo)!

No doubt he will be there for her in the days ahead, as will her son. But spoilers tease that there is someone else who unexpectedly shows up big time for Adrienne. Could it be her rejected ex-husband Justin (Wally Kurth)? Stay tuned, DOOL fans, it’s about to get captivating in Salem.