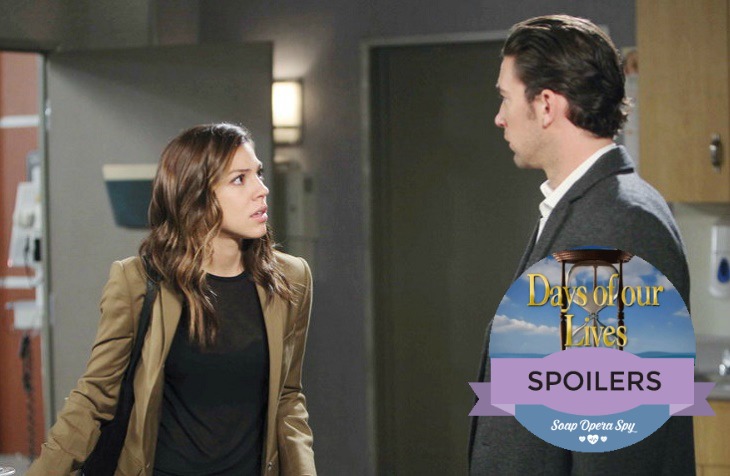 “Days of Our Lives” spoilers tease that Chad (Billy Flynn) will decide he’s ready to make a major commitment. Chad finally has Abigail (Kate Mansi) in his life and he doesn’t ever want to let her go. Abigail will be shocked when Chad asks her to marry him. This proposal may be slightly impulsive, but Chad will feel confident this is the right move. It’s clear that Chad’s world now revolves around Abigail and Thomas.

DOOL spoilers say Abigail will accept Chad’s offer of marriage and they’ll excitedly look forward to the next chapter of their relationship. “Days” viewers know that Chad and Abby’s romance has been anything but a fairytale so far. Unfortunately, that trend will likely continue. Abigail and Chad are currently enjoying a brief moment of happiness, but Andre (Thaao Penghlis) still poses a threat.

Related: Hope Continues To Unravel, In Danger After Stefano Confrontation – Can Rafe Save Her?

“Days of Our Lives” spoilers indicate that Andre will find out that Chad has been deceiving him. Chad had hoped to protect himself and his new family by keeping up the evil DiMera charade. Once Andre discovers the truth, Chad will probably run into some trouble.

Andre could confront Chad about his lies or he might choose to see how this plays out. The DiMeras like to be in the loop, but they don’t usually like to publicize it. Andre may start scheming to make Chad pay the price. It’s possible that we could see the topic of Abigail’s valuable land come up again.

We also have to remember that Thomas has just been confirmed as an official member of the DiMera family. Chad will undoubtedly be worried about keeping Thomas safe and free of the immoral lifestyle his father has always championed. DOOL rumors hint that Stefano (Joseph Mascolo) may soon die a gruesome death, but you can bet that Andre will carry on the DiMera legacy.

Related: Should Abigail Deveraux Be Recast – Or ‘Chabby’ Broken Up? Vote Now!

Can Chad keep Abigail and Thomas sheltered from the danger that’s looming? It’ll be a tough battle, but Chad will do everything in his power make sure Andre doesn’t cross the line. Stick with “Days of Our Lives” for updates on Chad’s attempt to keep his brother under control.

So “Days” fans what do you think about the news that Chad will ask Abigail to marry him? Are you glad that Abigail will accept Chad’s proposal? Will Andre find another way to manipulate Chad once he learns he’s been duped? Voice your opinion in the comments below and don’t forget to check Soap Opera Spy often for the latest “Days of Our Lives” spoilers, rumors, updates and news.

‘The Bold And The Beautiful’ Spoilers: Love-Struck Brooke Goes To Work At Spencer Publications – Will Katie Discover Sister’s Crush On Bill?

Days Of Our Lives Spoilers: What’s Gwen’s Connection To Rolf? Why Is She…