‘Days Of Our Lives’ Poll: Should Abigail Deveraux Be Recast – Or ‘Chabby’ Broken Up? Vote Now! 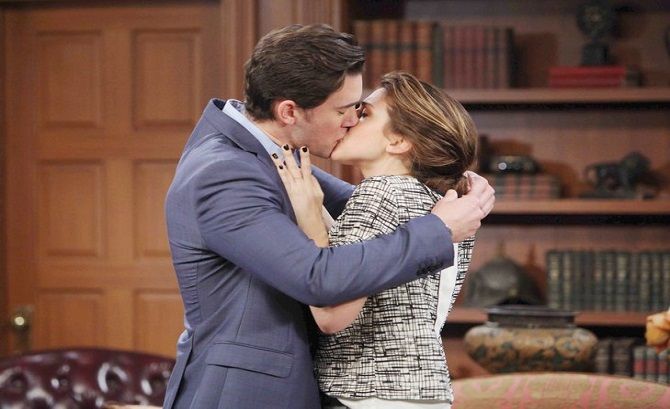 ‘Days of Our Lives’ (DOOL) fans were disappointed when news broke that Kate Mansi – Abigail Deveraux – was leaving the NBC soap. This seems a less than ideal time for her to depart since Abby is right in the middle of an intense storyline that seems to have a lot of potential for the future of her character.

After Abby’s long burning romance with Chad DiMera [Billy Flynn] and her dangerous liaison with Ben Weston [Robert Scott Wilson], it looked we were finally going to get our Chabby happily ever after – especially since they confirmed baby Thomas is Chad’s and not Ben’s.

DOOL rumors indicate that Mansi shot enough episodes to carry Abby into May (or possibly early June) depending on how the shows are edited. Mansi recently posted on Instagram some info about her departure and this bit on the plot: “STAY TUNED! I PROMISE you, you won’t want to miss what’s coming!”

So that reads like there might be closure to the Chabby storyline, right? But fans may not want closure – they may prefer to keep the super-couple in Salem and not see Chad and Abigail broken up. But the only way for that to happen is a recast since Mansi has moved on to other projects.

There have been rumors that NBC is casting for an actress that fits Abby’s description, but no confirmations on that yet. Too bad Abby alumni Ashley Benson is busy with Pretty Little Liars – it might be fun to see what she could do with the part now that she’s grown into her acting chops more.

There are some great actresses in the right age range up for grabs right now – Kristen Alderson (former Kiki Jerome from General Hospital) springs to mind… Or how about Kim Matula (former Hope Logan from The Bold and The Beautiful)?

What do you think DOOL fans, do you want a recast or can you live with Chad and Abby breaking up for good? Vote in the poll below and share your recast suggestions in the comments section below if you’d like to see Abigail Deveraux recast rather than splitting Salem after she splits with Chad…

Days of Our Lives Spoilers: Eric Martsolf and Stacy Haiduk Talks About Their Unique,…