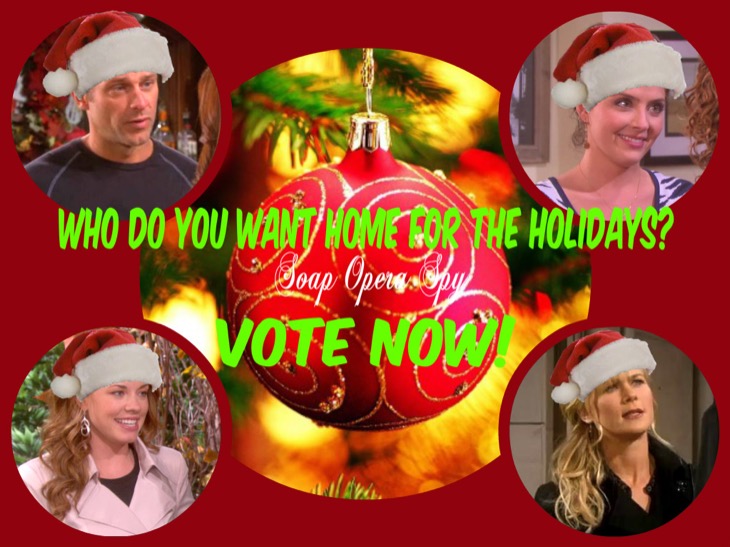 ‘Days of Our Lives’ (DOOL) has arrived at the holiday season. So many different families are missing members this year. Some have passed away, some have run away, others have moved out of town and/or went into hiding. So we are asking, who would you like to see come home for the holidays?

One important member of the Brady family, we would love to see home would be Eric Brady (Greg Vaughan). He has always been the kindest and loving Brady in the entire family. When he lost Nicole Walker (Ari Zucker) to Dr. Daniel Jonas (Shawn Christian), forgave ex-girlfriend, Serena Mason (Melissa Archer) for the diamond smuggling scheme, only to have her murdered by the Necktie Killer; Eric became an alcoholic.

Drinking and driving, Eric ended up killing Daniel, whose heart is the only thing that saved his step-brother, Brady Black (Eric Martsolf). Eric is given a 5 year prison sentence. It would be great to see him back in Salem because some people could really rely on him right now, mostly Brady and Jennifer Horton (Melissa Reeves). Fans know that Jen and Eric had shared a few private moments, but that was it. Jen could really use a friend, or more, this holiday season, no?

Melanie Jonas (Molly Burnett) would be another great person to reunite with her family for Christmas. Not only does her grandmother, Maggie Kiriakis (Suzanne Rogers) need some family around her, besides all the Kiriakis men; but we can be sure Melanie could be a great comfort to Brady and his young son, Tate since his mother took off so suddenly. Melanie would also have a bone to pick with Chloe Lane (Nadia Bjorlin), who decided to be a surrogate for Nicole after Daniel died, but has kept it a secret.

If you have been a fan of Days of Our Lives, you surely would want to see Samantha Brady DiMera (Alison Sweeney) back, no? Salem has not been the same since Sami left town with her children after the death of her beloved EJ (James Scott). Sami has been the troublemaker and spitfire of the Brady family ever since she was young. There hasn’t been anyone quite like her.

Sami most definitely could spend some time with Chad DiMera (Billy Flynn) considering he has no family left, other than his son Thomas and his retched brother Andre (Thaao Penghlis). Sami would be the one to reveal Abigail Deveraux DiMera (Marci Miller) is alive and well, hiding in her mother’s attic, and Andre was knew the whole time. Who misses her antics?

Although she hasn’t been gone that long, who would like to see Theresa Donovan (Jen Lilley) return in time to celebrate the holidays with her family? It is a slim possibility, but fans have grown quite fond of her character and her love story with Brady; wouldn’t it be fantastic if she were able to come home, explain her actions and their little family could be together for Christmas?

It would also be interesting to see how Victor Kiriakis (John Aniston) would interact with her now that he has seen how strong she is and how she would do literally do anything to protect Brady and Tate. Victor had some newfound respect for her, and if she were to return, his attitude change would make for a perfect holiday and Maggie would be able to enjoy her family in peace.

There are also other endless possibilities, what about Billy Reed and her daughter, Chelsea? Maybe Austin and Carrie Reed, or Max and Stephanie. Please take this poll and let us know who you would like to return to Salem for the holidays.

Be sure to watch NBC’s Days of Our Lives (DOOL) to catch up on all the exciting stories happening now and throughout the holidays. Check Soap Opera Spy often for updates, news, rumors and spoilers!

‘General Hospital’ RUMOR: Is Brytni Sarpy Out At GH?