‘The Young and The Restless’ (Y&R) Spoiler Friday October 2: Billy Knows Adam is Gabriel, Victor Knows Adam Is Alive, Ian Arrested, Sharon’s Doctor Up To Something 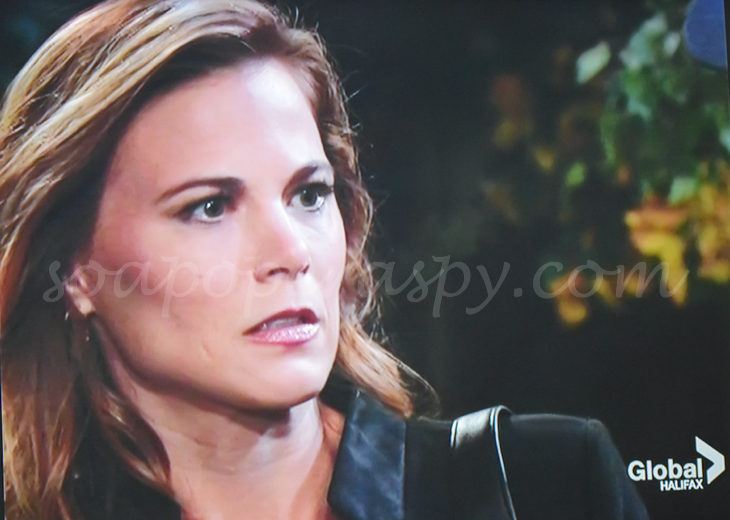 “The Young and the Restless” spoilers for Friday October 2, 2015 reveals that the Newman family knows that Adam Newman (Justin Hartley) is alive and well and living in Genoa City.  Chelsea (Melissa Claire Egan) is done with Adam and realizes he is never going to change so Chelsea reveals to Victoria (Amelia Heinle) and Billy (Burgess Jenkins) that Adam is Gabriel Bingham.  Meanwhile, Ian (Ray Wise) tells Phyllis (Gina Tognoni) that Adam Newman is behind the Paragon Project and Phyllis reveals to Victor (Eric Braeden) that his son is alive and well.

The Friday October 2, 2015 episode of “Y&R” opened with Jack (Peter Bergman) and Phyllis (Gina Tognoni) running into the Dive Bar and telling Summer (Hunter King) that Ian (Ray Wise) sneaked back into the prison after they talked. BUT, he is back out he escaped again. 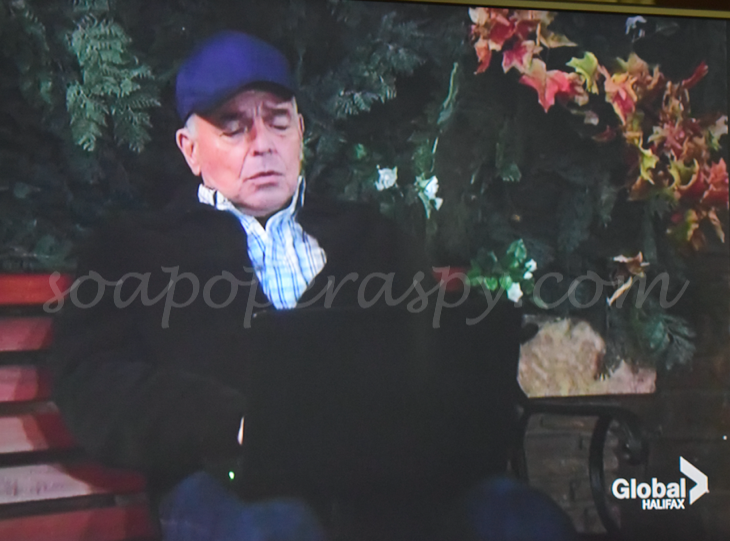 Meanwhile Ian Ward is in Chancellor Park singing to himself about Paragon. He laughs to himself how Paragon is chewing a hole in Newman Enterprises. He is anxious for them to see what Paragon can really do. 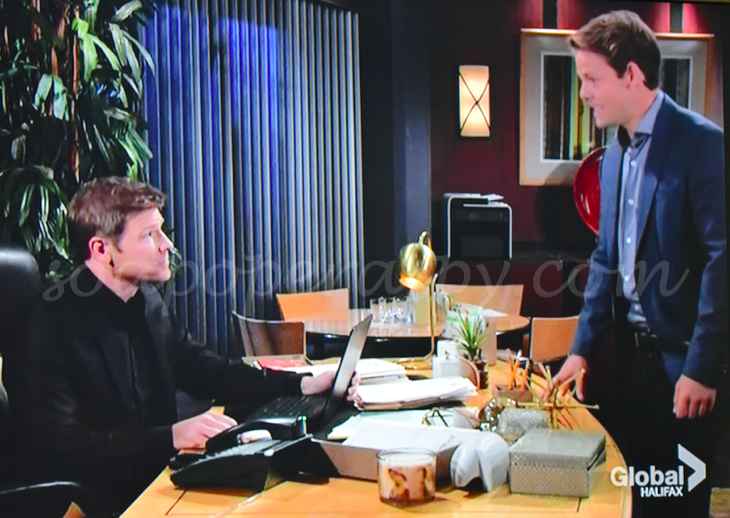 Kyle (Lachlan Buchanan) tells Billy (Burgess Jenkins) he hopes he is not buying more of Newman assets because if anything goes up for sale it is the Paragon virus. Kyle tells Billy to shut it down because Victor (Eric Braeden) is going to have his head. Billy laughs. 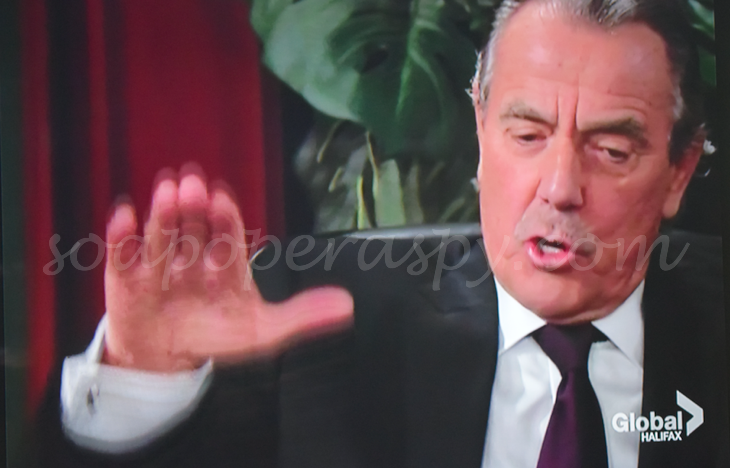 Victor is freaking out he wants his tech to shut down Paragon. Victoria (Amelia Heinle) and Abby (Melissa Ordway) come into his office and offer to help. Victor tells them it is too late his company is being brought down to its knees.

Paul (Doug Davidson) is visiting Patty at Fairview and he is proud of her because he thinks she is doing well. They use to not be able to have conversations. Patty (Stacy Haiduk) says she wants to be good. She says it is so unfair, when they cannot see another prisoner is not telling the truth.

Sharon is getting blood work she asks Doctor Anderson (Elizabeth Bogush) why and the Doctor tells her she needs to check if her she is absorbing the meds. 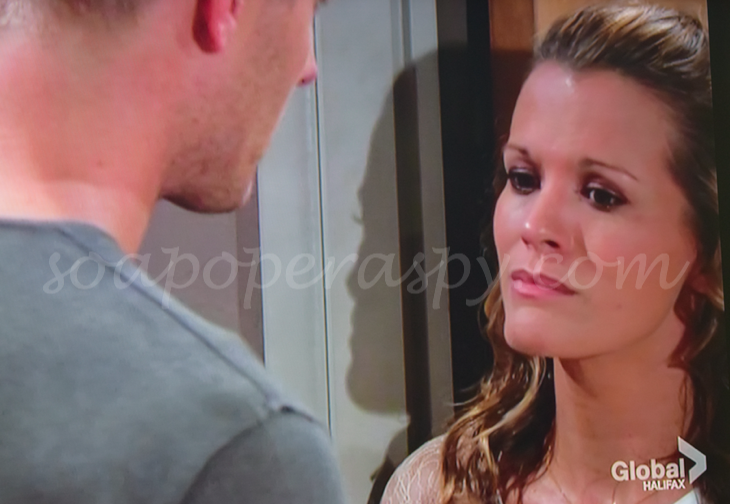 Chelsea threatens Adam, threatens to tell everyone everything what he has done. Adam tells her it is not the end. Adam tells Chelsea she can hate him but she cannot cut him out of his son’s life. Chelsea tells Adam Gabriel Bingham has no rights to Connor unless of course if Adam reveals whom Gabriel Bingham is. 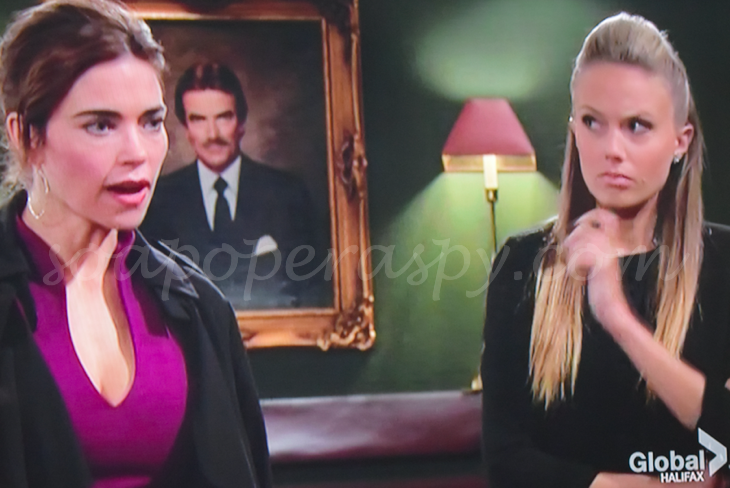 Kyle warns Billy that Victor will come after him. Kyle tries to reason with Billy with no success. Kyle tells Billy he is dragging his Father’s company through the mud. 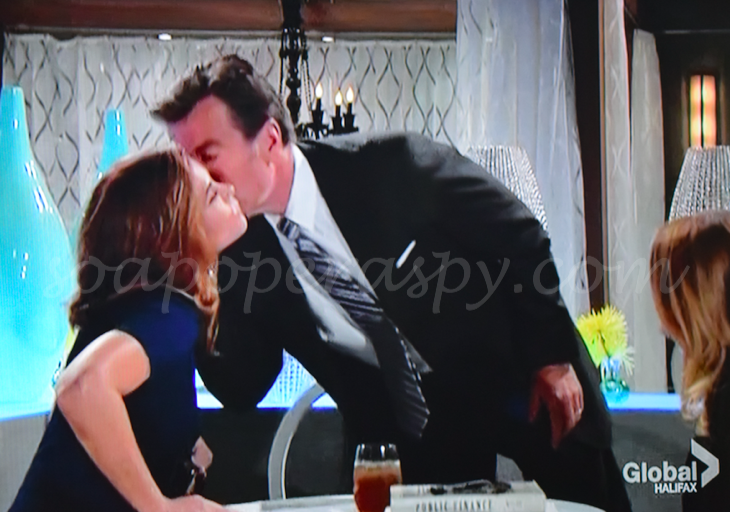 Jack tells Summer he hired a guard to protect her. Kyle calls Jack and tells him to get back to the office because Billy is buying up all of Newman assets.  Jack leaves. 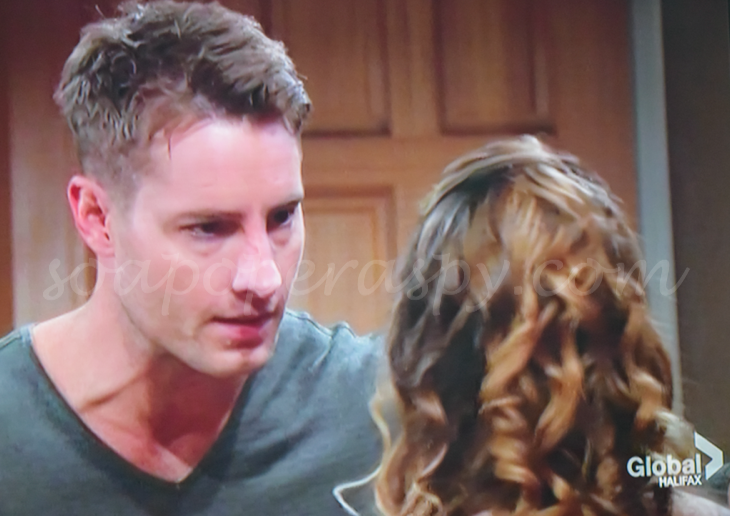 Adam tells Chelsea if she wants to punish him she better find a better way. Adam argues with Chelsea that they were supposed to tell Connor who he was when he was old enough. Chelsea tells Adam everything about him is a lie and he is not a good role model with the hate pouring out of him. Adam says he is riddled with regret. Chelsea thinks he should be focused on being a better man but inside his soul he his dead he is focussed on revenge.

Paul visits Sharon at Fairview he wanted to stop in and make sure Sharon and the baby were okay. Sharon tells Paul she is feeling good and asks about Dylan. (Steve Burton) Sharon tells Paul she saw Patty and she seems better. Paul is not so sure he feels Patty wants to tell him something. 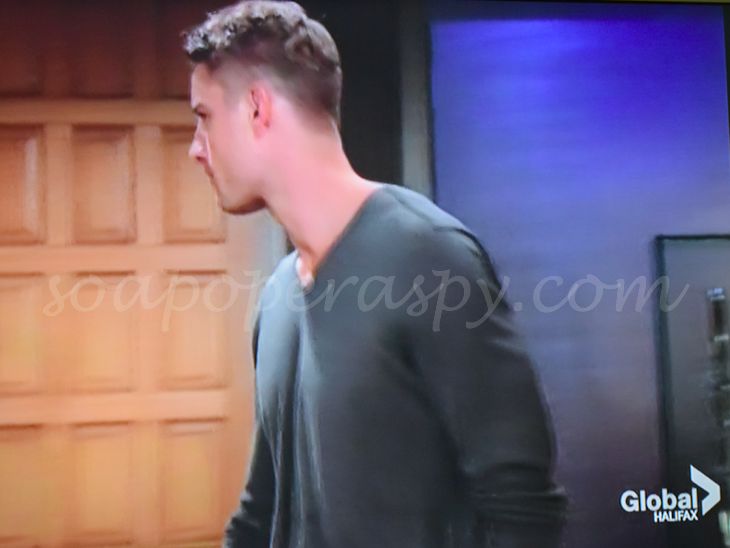 Adam tries to convince Chelsea that they were making it. Chelsea tells Adam he is a awful person, an awful father and she is sick of his words and lies. She tells Adam to leave them alone or she will run with Connor. Adam promises he will go stop Paragon and then he will come back and assures her they have a chance and Chelsea tells him they never had a chance because Adam keeps putting things in front of them. Chelsea says, “I see that now and I accept it. I don’t want this anymore.” She shuts the door on Adam. Chelsea sobs. 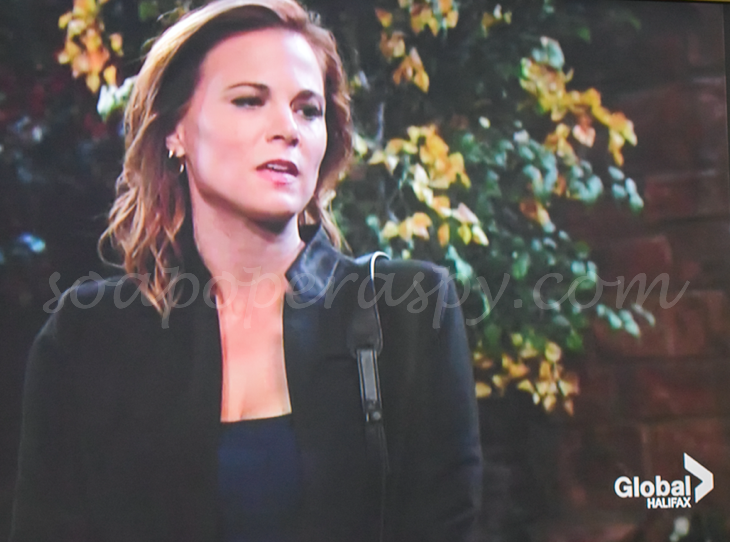 Ian is in Chancellor Park Phyllis comes in and Ian says, “I am so glad you could join me, please sit down.” 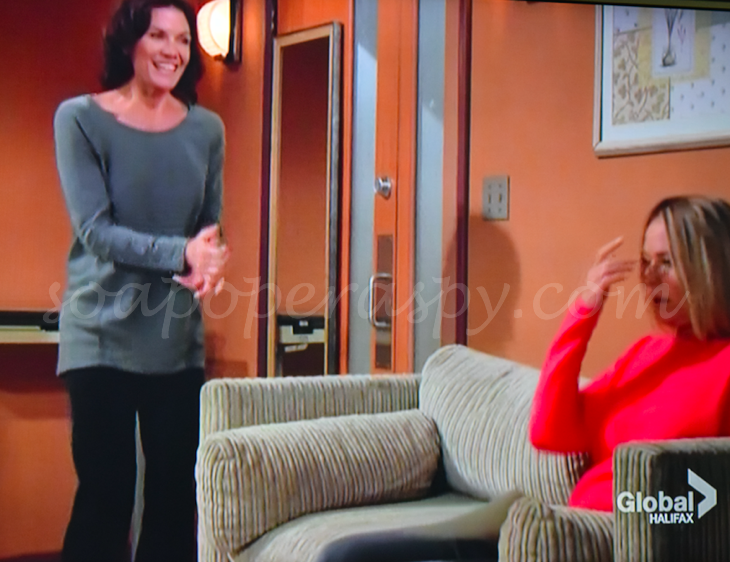 Jack comes in to see Billy and Billy tells Jack he is a hero and Jack tells him that he is getting a cheap fix sticking it to Victor. Billy claims he made good financial decisions and they are going to take Victor down and make sure he does not get back up. Jack is surprised. 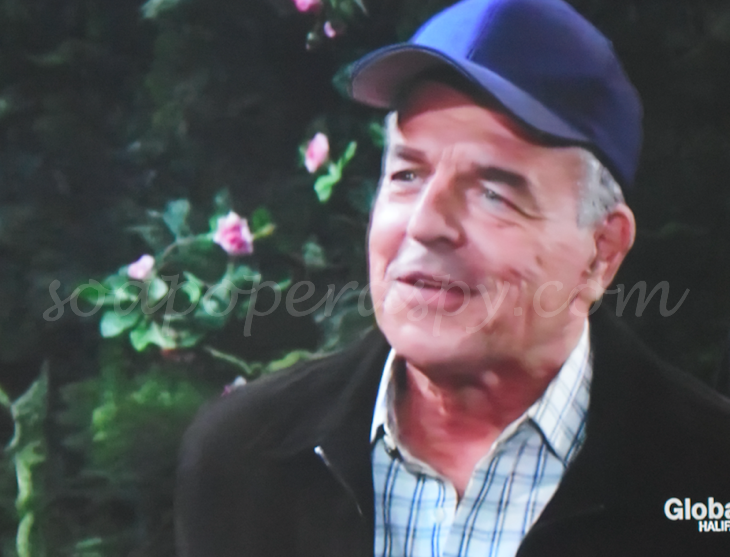 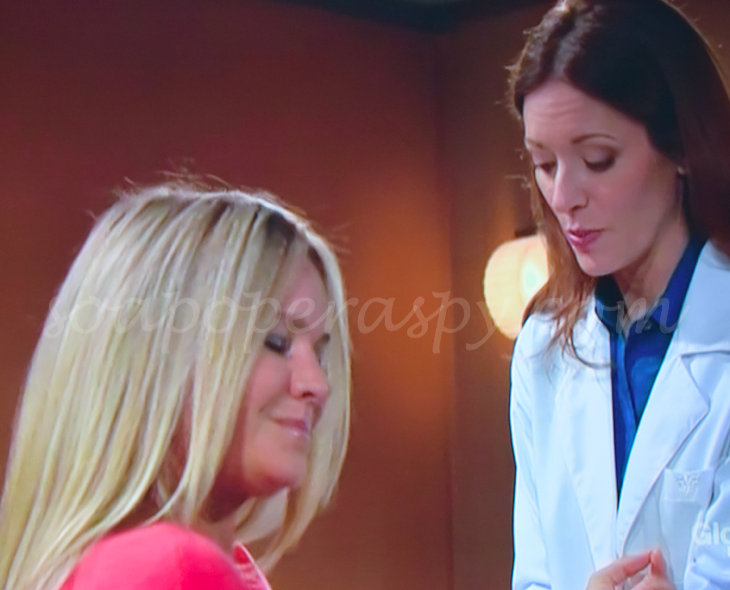 Doctor Anderson comes in to see Sharon and tells her she looks great. Sharon says she was afraid before because needles scare her. Sharon tells the Doctor she is feeling wonderful and is ready to sign out. The Doctor tells Sharon she is not ready to leave her blood shows she is in the middle of a bi-polar episode. 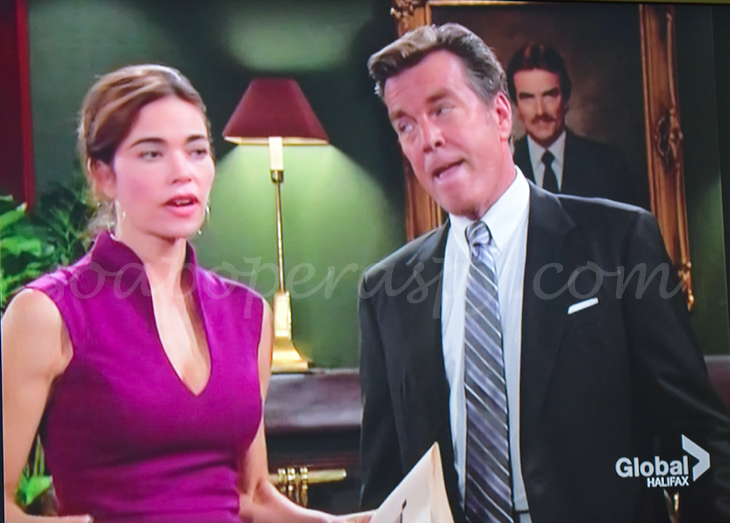 Victor and Victoria are calling people and Jack comes in and Victor gets pissed at him. Jack tells them he is not buying anything nor does he want anything Billy is buying everything and he is counting on Victoria to talk him down. Victoria agrees to try. 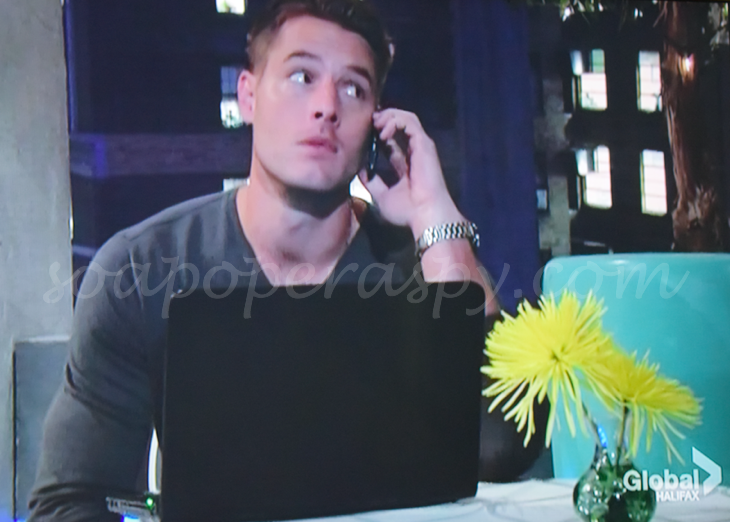 Adam is trying to track down Ian and leaves him a message and tells him to stop the virus NOW!

Phyllis tells Ian to tell her what he knows or she is calling Paul or Victor. Ian tells Phyllis he is working with a partner someone who hates Victor more than anyone. Ian tells Phyllis to guess and she won’t play. Ian says, “My brother in arms is Victor’s not so dearly departed son ADAM NEWMAN as I live and breath.” Phyllis looks shocked. 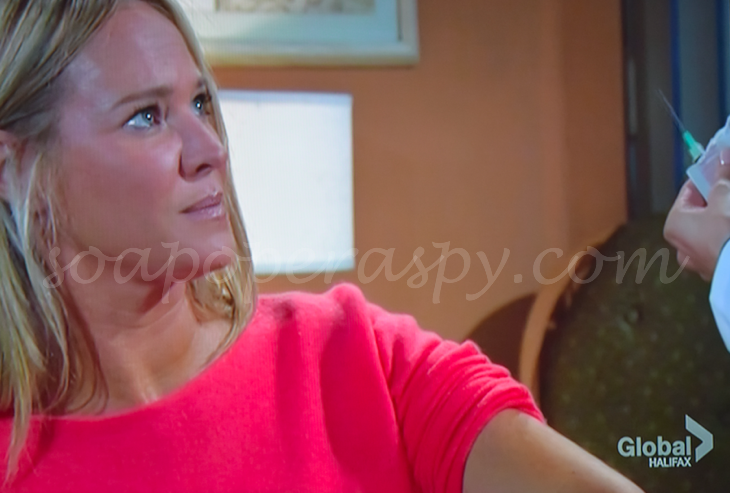 Victor tells Jack if he is waiting for him to say Thank You it won’t happen. Jack tells Victor he paid a price for the things Victor did and Jack says he wants to stop the virus and stop the insanity. Jack feels it has been enough. Victor says there will never be peace because he feels it is not only Ian but also someone in the Abbott family or someone close to them. Victor feels it in his gut.

Adam calls Ian and asks where Ian is. Adam reminds Ian he told him to stop the Paragon Project. Ian then lets Adam know he was speaking to Phyllis. 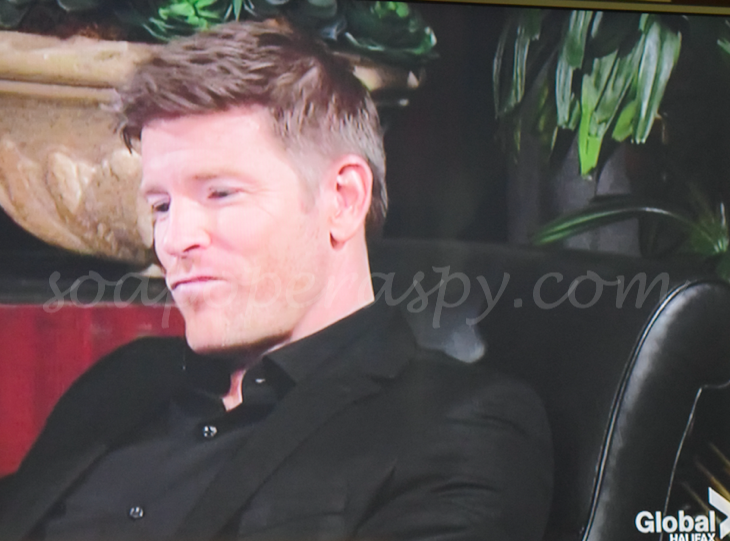 Victoria comes into Billy’s office and he comments, they sent the Calvary. Billy tells her to take her best shot. Victoria does not think he has to tell Billy anything she thinks Billy knows the right thing to do. Victoria accuses Billy of being no better than Ian Ward. Billy thinks if the situation was reversed Victor would do the same things. Chelsea comes in and says she needs to talk to Billy, it is about Adam. 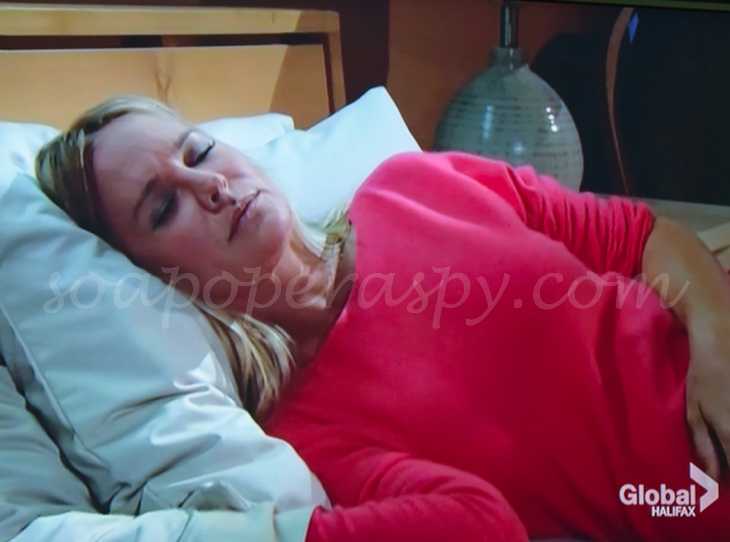 Patty comes in to see Sharon but she is sleeping. Sharon mumbles medicine… Patty shows her booties she made for the baby. Patty suggest she could call her daughter Penelope of Patrick and the Doctor comes in and asks Patty what she is doing. 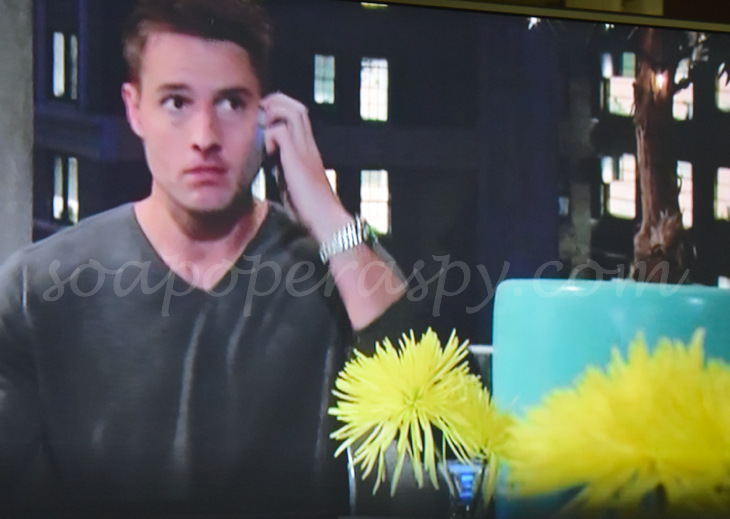 Adam asks Ian what he did to Phyllis and Ian says he would never do anything to hurt her. Adam tells Ian, “Stop Paragon and do it now.” Ian says, “I told you Paragon could not be stopped and goodbye Gabriel Bingham.” Ian hangs up.

Paul comes into Chancellor Park and arrests Ian. Ian tells them to hurry it along, “It is pasta night in the prison hospital.” Paul tells him he is released from the hospital and going to the Prison Maximum security.

Victoria asks Chelsea what she has to say about Adam because they have NO time to deal with it, they are dealing with a crisis. Chelsea tells Billy it is something they need to hear. Victoria tells her to get out and Chelsea says, “Adam is alive, he did not die in that car crash!” Billy says, “Is this some kind of sick joke?” Chelsea says, “He is alive and in town and calling himself Gabriel Bingham.” Billy is shocked.

Jack tells Victor to keep seeing enemies everywhere he looks ,the whole world is against him. Phyllis walks in and says, “There are enemies against him. This has been a big puzzle thing that did not make sense. I think I have the last piece of the puzzle. I wish there was another way I could tell you Victor.” Victor says, “Spit it out or get out!” Phyllis replies, “Adam isn’t dead Victor. I know how it sounds, it sounds impossible but your son is alive.”

That is it “The Young and the Restless” fans.  All hell broke loose on today’s episode!  Now that Billy knows Adam is Gabriel Bingham what is he going to do and will Billy be arrested for shooting Adam?  What is up with Sharon’s doctor?  There is certainly something going on with her!

‘The Bold and the Beautiful’ Spoilers: Watch The B&B Video Preview For Friday October 2 – SEE IT HERE!