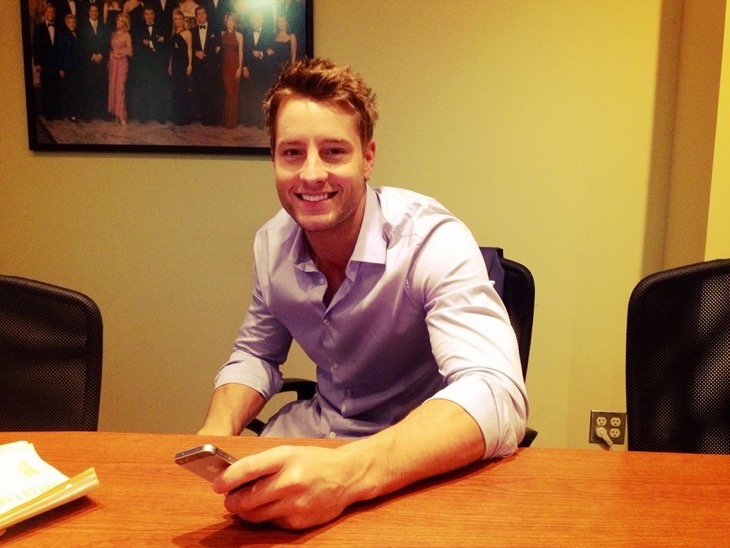 “Young and the Restless” star, Justin Hartley is settling into the role of Adam Newman quite nicely. Fans have warmed up to him and accepted him, which was not an easy feat. When he was originally cast as Adam, many fans were upset that Michael Muhney was being replaced. Justin Hartley revived Adam and made the role –all his own.

Michael Fairman sat down with Hartley to get his insight on Adam after portraying him for a year. He revealed that he doesn’t think that Adam hates his father, Victor (Eric Braeden). He thinks he loves him deeply and aspires to be like him in many ways. He also feels that Adam is jealous that his siblings always seemed to get more attention from his father than he.

He said on the set if “Y&R” he is surrounded by many talented actors. They help him ‘bring it’ every day. They teach him things about acting, life, and himself at times. He noted that Kristoff St. John was one of the most talented daytime actors, and he has learned so much from working with him.

He teased that Adam has a huge storyline coming for November sweeps. He hinted that Adam will be revealed by Sage possibly. He said Adam’s secret will have a huge impact not only on him but Sage as well. The life she has built could go up in smokes- because of her connection to Adam.

About his relationship with Jack- he said it is a very complex dynamic. He said in many ways Jack understands him. He understands what it feels like not to measure up or to feel like a disappointment. However, Adam has a way with alienating everyone he knows- Jack included.

Justin Hartley explained that Adam was a character many people rooted for because he is the underdog. He finds himself wanting to yell at Adam when he appears to have his life figured out when something flips his life upside down. Hartley promises that November sweeps is centered on Adam, Chelsea, and the journey to reclaim his life –as Adam. Do you want Adam Newman to be revealed? How will Sage react when the secret is exposed?