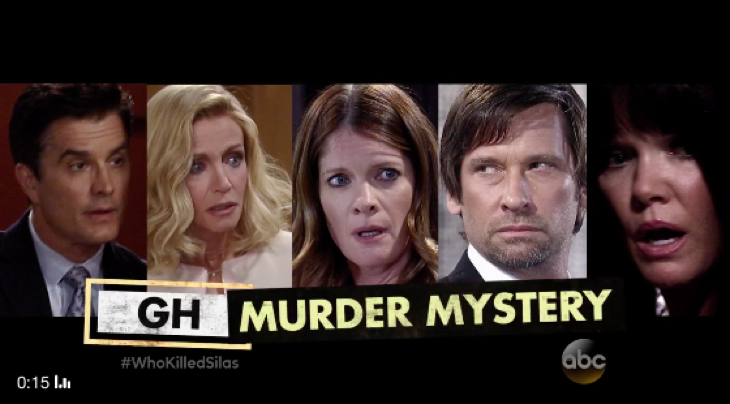 Wednesday’s GH is all about Nina, Ava and the explosive murder trial. Here are some ‘General Hospital’ spoilers to get you ready for the August 26th show.

First, Nina Clay [Michelle Stafford] and Franco [Roger Howarth] finally get some quality alone time. They have a real date and it’s so sweet and romantic – – other than the fact that it’s at the PCPD’s holding cell. Nina and Franco make the most of being locked up in adjoining cells and Franco reassures Nina that he’s there for her. He’s ready to take the murder rap because he loves her. Nina loves him too.

Franco’s sincere love helps Nina get back to sanity and clarity to keep her from going off the deep end. Meanwhile, Nathan West [Ryan Paevey] isn’t ready to give up on his sister Nina yet. Nathan is certain she didn’t kill Silas Clay [Michael Easton] no matter what the photo showed. He and Dante Falconeri [Dominic Zamprogna] brainstorm other possible explanations.

Nathan asks Dante to help him keep working the murder case and Dante agrees – then they manage a major breakthrough in the investigation. Madeline Reeves [Donna Mills] blows up at Ric Lansing [Rick Hearst] over him throwing Nina in jail for Silas’ murder. Maddy rips Ric a new one, but he’s able to talk her down using his snake oil slickness.

Ric convinces Madeline that Nina is right where they want her, that they can get her money and he’ll make sure that Nina ends up at Shadybrook for good – and not in Pentonville. Maddy isn’t happy but she’ll let Ric press on with his plans so that they can get their hands on Nina’s millions. How far will Maddy let this go?

Sonny Corinthos [Maurice Benard] stops by the PCPD lock up to threaten Ava Jerome [Maura West]. Sonny hates Ava for killing Connie Falconeri, but now Ava has made him epically furious by taking baby Avery’s bone marrow – even though it wasn’t her idea – and for toying with Morgan Corinthos [Bryan Craig] again. There’s nothing Ava can say to calm Sonny down.

Kiki Jerome [Hayley Erin] is feeling a little confrontational herself. Kiki comes to see Morgan at his parents’ house and wants to know why he’s taking it so personally that Ava is still alive and why he had the gall to say what Ava did to him was worse than her betrayal. Kiki’s grilling will lead Morgan to come further mentally unraveled – that boy is teetering on the edge right now. What will he do?

Alexis Davis [Nancy Lee Grahn] is shocked to find out she’s been hanging out with Ava and not Denise DeMuccio after the news of Ava being alive breaks. When Julian Jerome [William deVry] comes home, Alexis wants answers. She wants to know know how long Julian has known that Denise was Ava – and what other secrets he’s been keeping from her. Julian will come 100% clean (okay, maybe 90%).