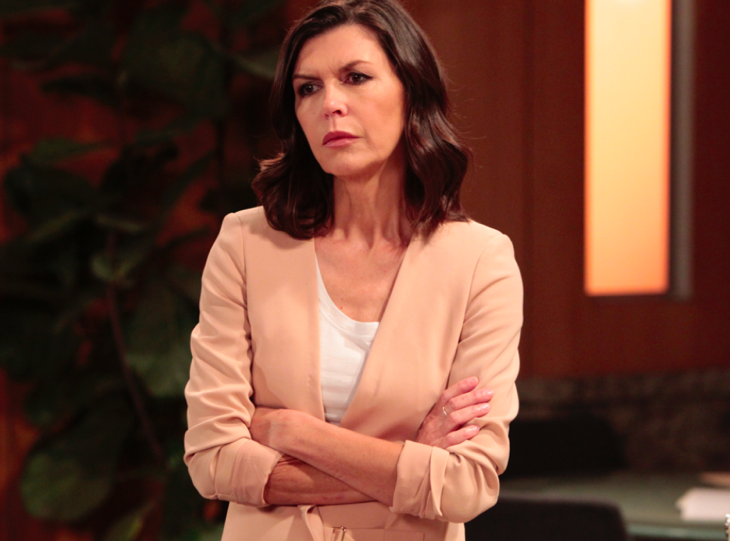 Anna Devane (Finola Hughes) is headed back to “General Hospital” but is she coming back alone? Rumor has it that Anna will bring Robert Scorpio (Tristan Rogers) with her. Anna was devastated by Duke Lavery’s death (Ian Buchanan). Has she found love again with ex-husband Robert?

In May 2015 TPTB announced that Finola Hughes would take a short break – approximately three months – from the daytime drama to direct a movie, the romantic comedy The Byrd and the Bees. Finola made her directorial debut in 2013 with “The Bet.”

Finola tweeted on August 6 that she would soon be back on the set of “General Hospital.” Pictured with Nathan West (Ryan Paevey), Carly Corinthos Jacks (Laura Wright) and Jake Doe – aka Jason Morgan (Billy Miller) the tweet read, ” I will be back working with these awesome peeps & the #GH family next week!!” This means Hughes returned to the set around August 13 and it shouldn’t be long before Anna is back in town.

Hopefully Anna won’t be alone! Fans have been clamoring for Tristin Rogers to return as Anna’s ex-husband Robert Scorpio. If the gorgeous federal agent can’t be with Duke Lavery then fans want her with Robert. When last we saw the former USB agent she had made the decision to return her beloved Duke’s ashes to Scotland.

There have been rumors that Tristan Rogers has been trying to work out contracts with both “The Young and the Restless” and “General Hospital” in order for him to continue his role as Colin Atkinson on “Y&R” and return as Robert Scorpio on “GH.” Since the news broke that Tristan was dropped to recurring status on “The Young and the Restless” that certainly opened the door for him to return to “General Hospital” and fans are thrilled.

When Anna Devane returns will there be a power play for the job of police commissioner? Jordan Ashford (Vinessa Antoine) was appointed to the position by Mayor Janice Lomax (Saidah Arrika Ekulona) after firing Kyle Slone (Robb Derringer). Jordan has not proven to be effective in the high-powered job and Anna could slide right back into the position. And with Robert by her side there is nothing that the brainy brunette can’t accomplish.

What do you think? Anna Devane is definitely returning to Port Charles. Will ex-husband – maybe future husband – Robert Scorpio be with her? Did the two meet up as Anna traveled Duke’s old stomping grounds? It certainly would be nice to see Tristan and Finola reunited as Anna and Robert, don’t you think?