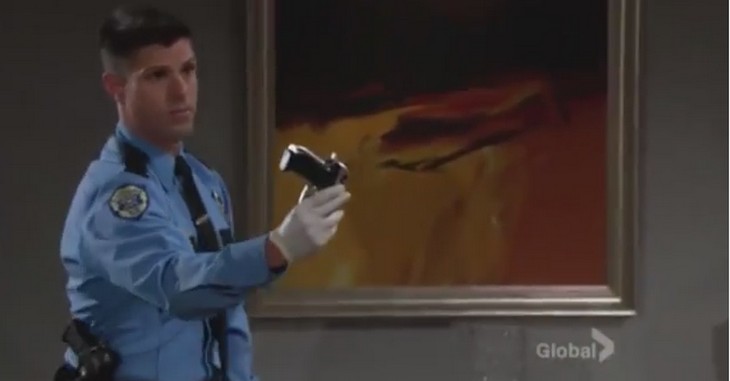 “The Young and the Restless” spoilers for Friday, July 17, reveal that we’ll see some tense moments going down in Genoa City. The episode opens with Abby (Melissa Ordway) bemoaning the fact that she can’t get anyone to take her seriously. Stitch (Sean Carrigan) watches as Abby starts her business meeting. A client mentions that Abby is hot. Stitch gets paged and heads to the hospital. After some tough negotiations, Abby closes the deal and they pop open a bottle of bubbly. Eventually, a slightly drunk Abby takes the exec up on his offer of a ride.

As Devon (Bryton James) and Hilary (Mishael Morgan) solidify the plans for their wedding, Lily (Christel Khalil) sees that Joe (Scott Elrod) has a black eye. Cane (Daniel Goddard) shows up and says Joe deserved much worse than that. They argue until Devon and Hilary enter the fray. Cane makes it clear that he doesn’t want to see them. Devon urges Cane to work things out. Lily and Cane begin to bicker over what will happen to their children.

Watch The Highlights of Friday’s The Young and the Restless Episode Right Here!

Sage (Kelly Sullivan) storms into Adam’s (Justin Hartley) office to get the scoop on Marisa (Sofia Pernas). Adam tells Sage not to worry. Sage’s child is a Newman regardless of who the father is. Sage insists she wants updates on whatever Adam is doing with Marisa, but he says he’s taking care of it. Later, Sage orders a paternity test.

Other “Young and the Restless” spoilers tease that some startling developments will occur at the hospital. Nikki (Melody Thomas Scott) suggests Gabriel (Justin Hartley) is hiding a gun at Chelsea’s (Melissa Claire Egan) place. Phyllis (Gina Tognoni) isn’t so sure Gabe would involve Chelsea like that. Ashley (Eileen Davidson) heads over to Chelsea’s apartment to investigate. Nikki indicates that Victor (Eric Braeden) may not be trustworthy. Phyllis mentions that Jack (Peter Bergman) had a gun. Nikki thinks that means Victor is telling the truth about shooting in self-defense. However, Phyllis trusts in what Jack told her.

At Chelsea’s, Ashley makes up an excuse about needing sketches. Chelsea goes to retrieve them. While Chelsea is gone, Ashley rummages around. Ashley spots a gun in the cabinet. After getting the sketches, Ashley tips off the police. The cops show up with a search warrant and the officer that’s been serving as Victor’s guard finds the gun. Chelsea questions Adam and he says someone must have planted it. Later, Paul (Doug Davidson) reveals that there were fingerprints on the gun and they belong to Jack.

Phyllis tells Jack about the gun situation and wonders if the number two he wrote referred to the two guns. After some coaxing, Jack once again communicates with Phyllis through hand squeezes. Jack gives two squeezes to say he didn’t mean two guns. Phyllis now knows for sure that Victor wasn’t acting in self-defense.

Avery (Jessica Collins) speaks to a news reporter outside Crimson Lights and says she took the law into her own hands. Avery tearfully discusses her rape and says she’ll be taking a leave of absence. Afterward, Joe wonders why Avery was willing to put everything out there so publicly. Avery admits it was about maintaining her self-respect. Joe asks what her plans are and Avery says she’s leaving town. Joe might want to consider doing the same thing.

How Will Nick React When He Learns Gabriel Bingham is Dear Brother Adam Newman!

Michael (Christian LeBlanc) tries to settle down Cane and Lily as they argue about a custody agreement. Lily wants forgiveness and Michael hints that they should fix their marriage before it’s too late. Cane makes a snarky remark about the possibility that Lily has cheated with other men before Joe. Lily slaps Cane and indicates that she can play dirty, too.

Lily says she won’t let Cane take her kids away from her. Cane replies, “Watch me.” It sounds like things could get nasty between these two. Y&R rumors say that Cane may retaliate with a steamy fling of his own. Stay tuned to “The Young and the Restless” to see if this is really the end of Cane and Lily’s marriage.

So Y&R fans, what do you think about Avery’s decision to leave Genoa City? Will you miss Avery? Will Victor’s plan to bring down Gabriel work? Will Cane and Lily be able to get past their struggles? Let us know what you think in the comments below and don’t forget to check Soap Opera Spy tomorrow for the latest “Young and the Restless” spoilers, rumors, updates and news.

‘Days of Our Lives’ Spoilers for Friday, July 17: Abigail Ready For Drastic Measures If Chad Is Baby’s Father, Someone Else Discovers Pregnancy!