‘The Young and the Restless’ Spoilers April 30: Gabriel Agrees To Work For Victor, Victoria Cancels Hex, Sage and Gabriel Make Out 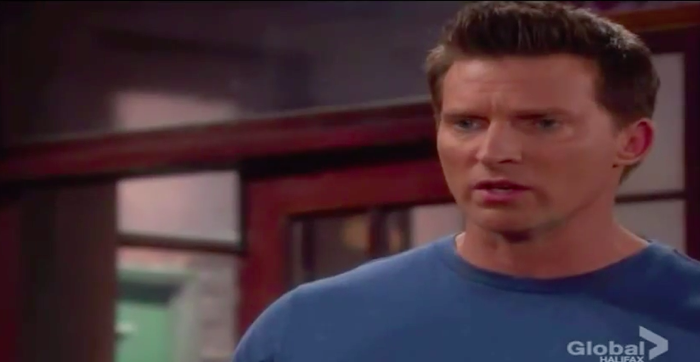 “The Young and the Restless” spoilers for April 30 are laying the groundwork for Billy and Chelsea’s wedding.  From all the sly remarks that Billy has been making it seems certain he is going to reveal that Chelsea betrayed him with Gabriel. Meanwhile, Victor has decided to keep Gabriel close to him and has convinced him to take another job.  Of course don’t underestimate Adam’s strategic goals in accepting employment with dead old dad. The temperature rises for a surprising couple at the Athletic Club.

The April 30th episode of Y&R opens with Michael [Christian LeBlanc] at Sharon’s [Sharon Case] house she gives him herbal tea it seems the problem with Michael was he was dehydrated. He says he is going to sneak coffee when she is not looking.

At Crimson Lights Nick [Joshua Morrow] asks Victoria [Amelia Heinle] if Faith was happy to sleepover at her house. Victoria tells him not to worry she was fine and she does not understand what she said might cause her Daddy to lose custody. Dylan [Steve Burton] overhears and asks why Nick might lose custody?

Abby [Melissa Ordway] and Stitch [Sean Carrigan] are at Jabot kissing, when Ashley [Eileen Davidson] comes in she tells them they should act more professionally.

Gabriel [Justin Hartley] and Victor [Eric Braeden] are talking and Victor thinks Gabriel can help the tension between the Newmans and the Abbotts. Billy [Burgess Jenkins] and Chelsea [Melissa Claire Egan] walk into the Athletic Club and see Adam and Victor. Billy makes a sarcastic remark about them and then tells Chelsea he wants their wedding to be a day she WILL NEVER forget. 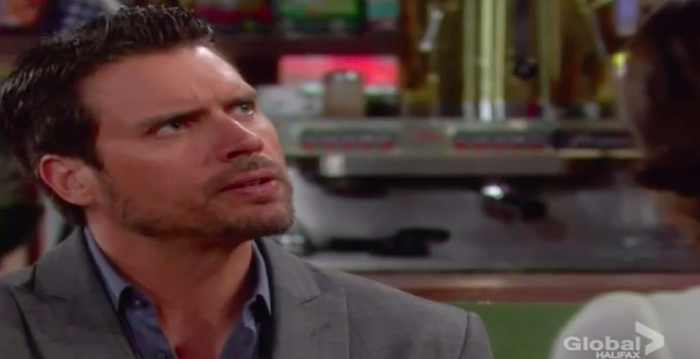 Nick tells Dylan the story about how CPS stepped in. Dylan is not pleased Nick did not tell Sharon and tells Nick he was wrong not telling her.

Victor asks Gabriel to put their differences aside. Victor thinks Gabriel is in a perfect position to be the mediator between the Newmans and the Abbots and he would like him to do it for more money. He knows Gabriel needs money because he lost his inheritance. He also wants Gabriel to work on Chelsea to get her back to Jabot.

Gabriel and Victor see Chelsea and Billy come in and Gabriel is surprised they are already out he asks how the wedding went. Billy says it did not happen and Chelsea says it will happen that afternoon.

Ashley tells Stitch and Abby Victoria is concerned about Hex because someone posted a scathing review about it. It was a very influential beauty columnist and she hates HEX thinks it is snake oil. Her story has gone viral.

Michael tells Sharon he wants to take a calculated risk in her defense and he feels he has it. Michael is confident he is going to get the tire iron thrown out. Just to be safe he is having the tire iron tested again. He wants the new lab to go deeper. Michael feels if the tire iron is thrown out the case will fall apart.

Dylan shows up at Sharon’s house. He is there to tell her that Nick punched a reporter out, Sharon knows already. But Dylan goes on how Faith told her therapist what happened and now CPS is investigating. Sharon is upset. Michael promises to check with his contacts.

Victoria asks Sage [Kelly Sullivan] if she has a second. Victoria tells Sage it is going to take a while to sort things out with Faith and Faith is having issues with Sage and Nick so she wants Sage to be sensitive to the situation and step back.

Chelsea tells Victor and Gabriel that her and Billy decided not to elope and have their family present at the wedding. Victor asks Chelsea to discuss her fashion line he asks her to go for a drink. She leaves and then Billy asks Gabriel if he is still willing to be his best man. 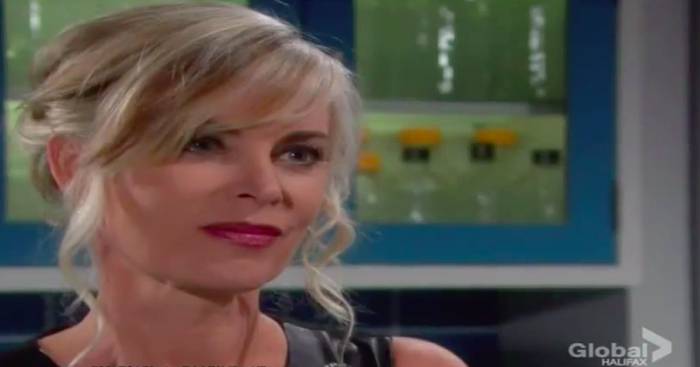 Ashley, Stitch and Gabe decided to change the Hex formula a bit and then send out a press release that it is new and improved. They tell Victoria their plans – but she says she has decided to pull the line because the bad review has damaged the line. There has been fall out and effective immediately they are out of the love potion business.

Ashley is furious and accuses her of scrapping her scent because Victoria wants a scent of her own. Victoria tells her she needs to accept that she works for her NOW!

Victor tells Chelsea that he and Victoria respect her talent – they know how important she is. Victor tells her to think about coming back.

Gabriel thinks the only reason Billy wants him as best man is to rub his nose in it but Billy tells him he wants to be his friend. Gabriel says NO I am not going – Billy tells Gabriel he hopes he changes his mind because this will be an event he won’t want to miss.

The CPS investigator is at Sharon’s house and Sharon tells her she knows she is trying to do what is best for Faith. Sharon defends Nick and supports him. She tells the investigator that Nick has never hurt a child and never would and Faith needs her father.

Sage calls Nick and leaves a message about how worried she is about him.

Nick comes to Sharon’s house and he is peeved he thinks Sharon is trying to get custody of Faith. Michael and Dylan jump in and stop him and tell him that Sharon actually defended him and got the Investigator to decide he can keep Faith. Nick apologizes. Sharon tells him nothing is more important than keeping their kids safe.

Gabriel is drinking at the bar and Victor says it is a bit early. Victor then says, “I have to say when you saw Billy Boy Abbott and Chelsea together if looks could kill. So have you given it thought about working for our company?” Gabriel responds, “The truth is I need the money so whatever capacity, I will be there.” Victor says, “That is nice to know, I am sure we will have fun together, alright don’t drink too much.” Victor leaves Gabriel keeps drinking. 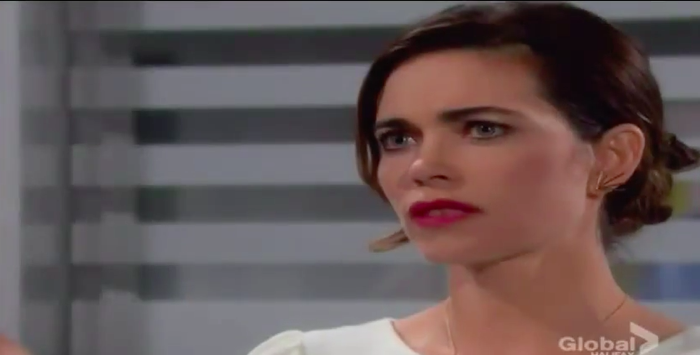 Victoria tells Ashley she has not intention of getting rid of her she is a talented chemist. Ashley says, “your plan is crystal clear you are going to make my life miserable but no matter what you do I am not quitting.”

Billy and Chelsea come in and tell everyone they are getting married and he wants them all there pretty much now. Billy asks Victoria to come to the wedding.

Victoria does not want to go but Billy tries to convince her. Victoria declines Victor walks in and says, “that is a good idea, you have more important things to do.” 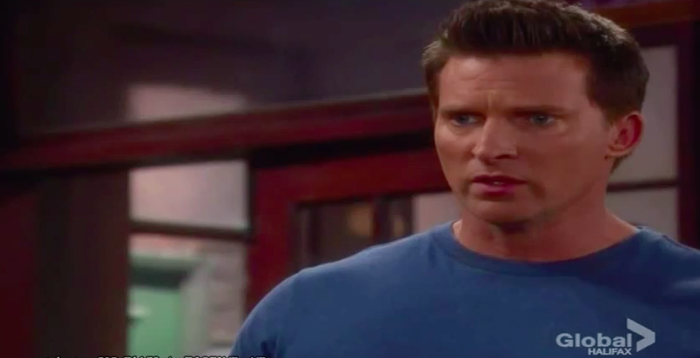 Michael leaves to go to the office and Sharon thanks Dylan for always being there for her.

Nick tells Sage he got the call from CPS and Faith stays with him. Sage says it was huge of Sharon to defend him and hugs him. Sage wants to know why Nick is not celebrating and Nick says CPS will be watching him in the future. Sage gets the picture that Nick is afraid Faith will say something about her. She tells Nick they can take a step back and Nick tells her he cannot give her a date. Sage asks if he is breaking up with her. He kisses her cheek and says he is sorry it has happened this way.

Dylan calls Avery and tells her he misses her and wants to know how things are going. Meanwhile Sharon is eavesdropping.

Michael is getting a coffee and the phone rings they finished retesting the tire iron. He asks about the results.

Ashley is taking it personally that Victoria cancelled HEX and tells Victor so. Victor says he 100% supports Victoria and he is sure Jack supports Victoria’s decision and asks if she has spoken to him. Ashley says, “That is news to me I have not talked to Jack today, Not yesterday…. I am hoping I can corner him at Billy’s wedding.” Victor, “hmm I’ll be damned…”

Abby asks Victoria if she is okay, she knows Billy’s wedding came as a surprise. Victoria says she is okay but she does not think it would be appropriate for her to be at the wedding.

Chelsea is not pleased she cannot believe it did not occur to Billy she did not want his ex-wife at the wedding. Billy just wants everyone to be there when they say their vows.

Sage is drinking and Gabriel walks over and says, “Look at you I feel I am one drink ahead of you. I guess you have not heard there is a big event downstairs Billy and Chelsea are getting married.” Sage sarcastically says, “Boo hoo I never could see what you saw in her.” Gabriel responds, “Really I never saw what you saw in my brother a big bland moron. You have the worse taste in men!”

Sage tells Gabriel her and Nick have broken up and asks him not to be mean for a minutes. Gabriel agrees and then goes on about how she is always trying to make the men in her life be what she wants. She tried to make him like Gabriel.

Sage is really upset and tells Gabriel how he could never live up to Gabriel Bingham. Gabriel was nice and everyone loved him. Gabriel pulls her over and kisses her – she pushes him away looks at him then pulls him back and they start making out.

That is it SOS fans! Now that Billy knows that Chelsea and Gabriel slept together it looks like Billy is setting up something big and nasty to happen at his wedding to Chelsea.  What do you think he is going to do, you know it’s going to be nothing nice!  Were you surprised that Gabriel agreed to work with Victor or is this a Machavalian ploy to keep your enemies closer? Victor did say he keeps his enemies close but there is no reason Adam can’t follow the same strategy.  Do you think Victoria is really trying to get Ashley to quit?

General Hospital 2015 Nurses Ball Spoilers: Duke Lavery Will Die (Or Will He?)