‘The Young and the Restless’ News: Daniel Goddard Thanks ‘Y&R’ Fans and Updates On Broken Elbow: Surgery Tomorrow! 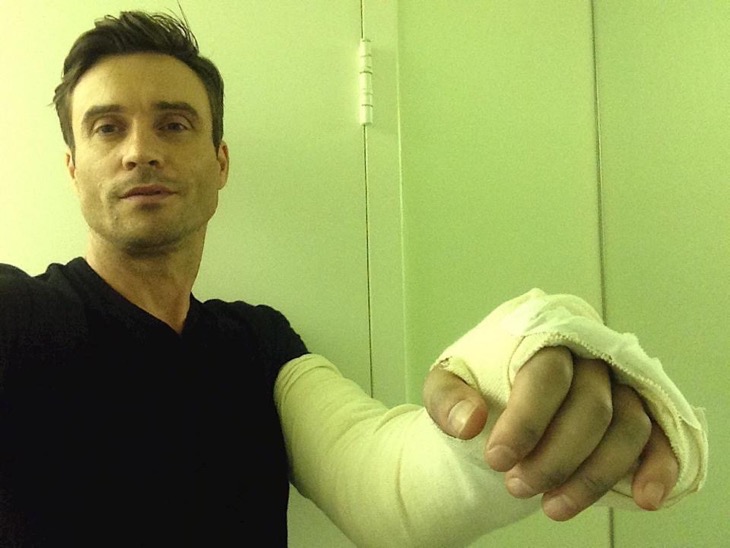 “The Young and the Restless” star Daniel Goddard injured himself on the set of the CBS soap opera last week while filming an up-and-coming fight scene. Y&R spoilers tease that the scene was most likely between Daniel’s character Cane Ashby and Scott Elrod’s character Joe Clark. Daniel too to Twitter to share the upsetting news with “The Young and the Restless” fans and they all rallied behind him with support.

On Tuesday September 22 Daniel once again took to social media to update his fans on his broken elbow and let them know what is going on. It looks like Daniel’s injury is very serious – and he is undergoing surgery tomorrow! Apparently, the surgery was delayed a bit because the swelling was too severe and the elbow needed to bleed out. We’re not doctors, but that doesn’t sound like a walk in the park.

Here’s the message Daniel Goddard sent out to his fans:

My elbow is still broken and hasn’t been fixed yet because it’s still too swollen to operate… The break is still bleeding out as you can see by the color of my fingers… but I’m at The Young and the Restless today filming because we have so much to do for our huge November sweeps story lines! I have surgery scheduled for tomorrow morning where they will screw and wire my elbow back together. I wanted to say thank you! You have been such a source of comfort, support and strength over the last few days and I truly and dearly appreciate every single message wishing me well. You have no idea know how much it means to me. I love you!”

Soap Opera Spy would like to wish Daniel Goddard good luck with his surgery, and well wishes for a speedy recovery.

‘General Hospital’ POLL: Which GH Actor Would You Like To See On Dancing With The Stars?

‘Days of Our Lives’ Spoilers: Lani Price Arrives in Salem, Miami Cop Could Tie Into Abe’s Backstory – Will Lani Get Involved with Rafe?