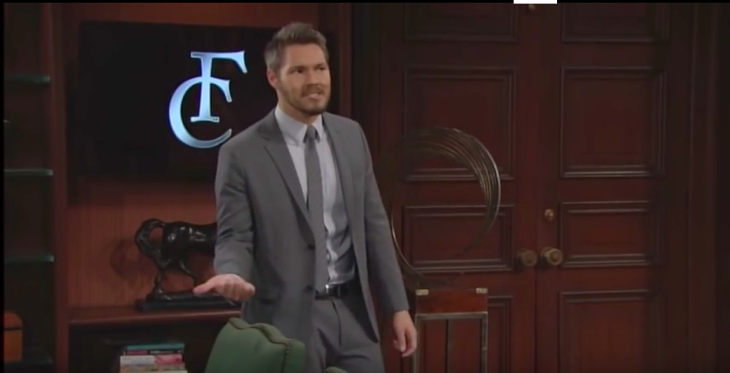 “The Bold and the Beautiful” spoilers tease that Liam (Scott Clifton) will decide to rev up the romance. Things have been busy around the office lately. Liam has been spending most of his time nosing into Ridge (Thorsten Kaye) and Caroline’s (Linsey Godfrey) business. However, Liam will take a break from sniffing around the vasectomy conundrum and focus on his relationship.

Liam will plan a lovely event for his lady, but it looks like Steffy’s (Jacqueline MacInnes Wood) mind will be elsewhere. Thomas (Pierson Fode) is about to stir up more trouble in the form of a very inappropriate bet. Once Thomas reveals his sneaky plot to win Ivy (Ashleigh Brewer) over, Steffy will have difficulty concentrating on Liam’s efforts.

When Steffy doesn’t seem to be enjoying herself, Liam will likely realize that she’s somewhat distracted. Though Steffy will be worried about what Thomas is trying to pull, she might want to keep the details to herself. We all know how Liam loves to play the hero. Plus, Liam is already annoyed at the way Thomas bashes the Spencers. If Liam learns what’s up, there could be a big problem.

Fortunately, it appears there’ll be no need for Steffy or Liam to intervene. “The Bold and the Beautiful” spoilers indicate that Ivy will manage to hold her own against Thomas’ craftiness. Nevertheless, there’s bound to be some tension after Thomas kicks his scheme in gear. B&B rumors hint that that we’ll soon see additional feuding between Thomas and the Spencer brothers.

Wyatt (Darin Brooks) certainly doesn’t want Thomas anywhere near his girlfriend and Liam is still fairly protective of Ivy as well. It sounds like another battle is brewing, but will Thomas get sidetracked by the ongoing baby drama with Ridge and Caroline? Stick with “The Bold and the Beautiful” to find out which ordeal will demand Thomas’ attention.
So B&B fans, what do you think about the news that Liam will try to set the mood and give Steffy an evening to remember? Will Liam be bummed when Steffy’s too distracted to notice? Will Thomas end up inciting the wrath of the Spencers if they get updates on his slimy behavior? Let us know what you think in the comments below and don’t forget to check Soap Opera Spy often for the latest “Bold and the Beautiful” spoilers, rumors, updates and news.