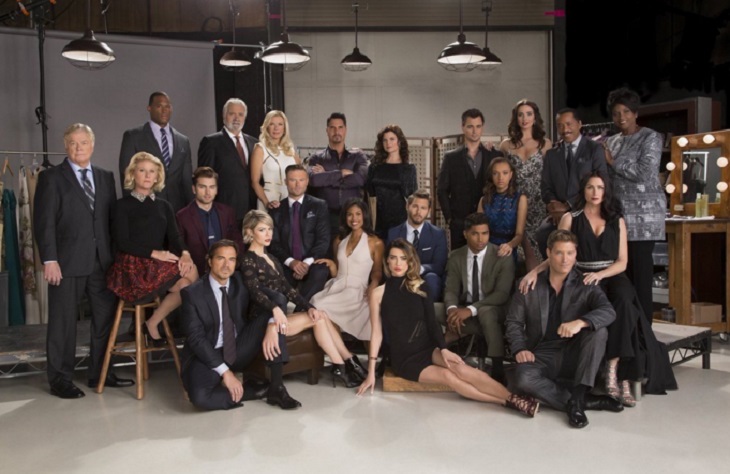 This week “The Bold And The Beautiful” unveiled an all new 2015 cast photo, including all of our favorite “B&B” stars.  The “Bold” cast was dressed impeccably (as always) and posing at what appears to be set of one of their Forrester Creations fashion shows or perhaps a photo shoot – which seems fitting seeing as how fashion has been such an integral part of the CBS soap opera over the years.  Behind the smiling cast members you can see different mirrors, lighting, make-up tables, and racks full of clothes.

The cast photo, which was unveiled by CBS on Thursday November 12th, includes all of the latest additions to the “Bold And The Beautiful” cast.  Maya and Nicole’s parents, Julian and Vivienne (Obba Babatunde and Anna Maria Horsford) just returned to the soap opera for Nicole’s surrogate pregnancy storyline – and they were included in the official cast photo.

Several members of the “Bold” cast tweeted the photo out to their fans, including Katherine Kelly-Lang.  The Brooke Forrester portrayer raved, “I absolutely  luv this cast! Everyone is so great to work with! We r all so lucky! Luv u guys!”  Check out the new “B&B” photo and let us know what you think in the comments below, don’t forget to check Soap Opera Spy for all of your “The Bold And The Beautiful” spoilers and news!

‘Days Of Our Lives’ News: Kate Mansi Raising Money For ‘Be Bold Be Bald’ Charity

‘One Life To Live’ News: Alum Barbara Niven Stars In ‘Murder She Baked: A Plum Pudding Mystery’ With Alison Sweeney