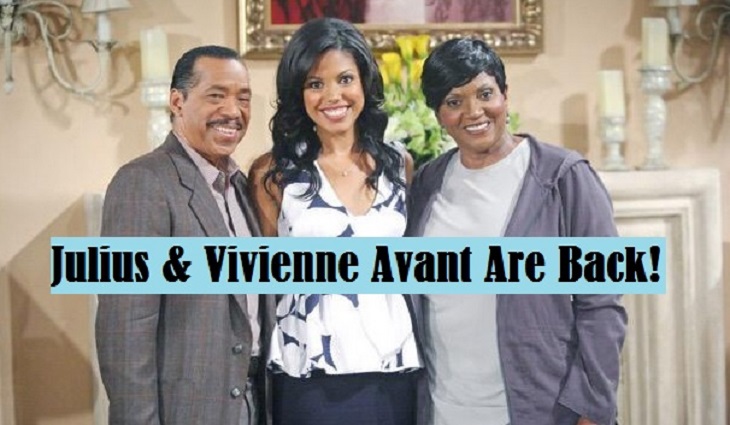 “The Bold And The Beautiful” spoilers tease that Obba Babatunde and Anna Maria Horsford are returning to the CBS soap opera.  Babatunde and Horsford play the parts of Julius and Vivienne Avant – Nicole and Maya’s parents.  According to B&B spoilers, Julius and Vivienne are not just passing through to check in on their daughters, they are moving to California to be closer to them and will be sticking around this time!

The last time Obba and Anna Maria appeared on “The Bold And The Beautiful,” they brought along a ton of drama – it was the first time Julius Avant had to face his transgender daughter Maya after her transition.  Of course, the Avant parents’ return won’t exactly be a walk in the park.  Julius Avant was concerned before about the effect that Maya’s sexuality will have on her little sister Nicole (Reign Edwards) – imagine how he will react when he learns that Rick and Maya (Karla Mosley) asked Nicole to be their surrogate!

Obba Babatunde recently sat down with TV Insider to discuss his return to “The Bold And The Beautiful,” and of course dish on a few B&B spoilers regarding his upcoming storyline.  Despite the fact that Julius Avant was kicked out of his daughter’s wedding the last time he was in town, the actor explains that his character’s heart is in a good place.  Babatunde teased, “He can’t rest being 2,500 miles away from his girls. That’s his justification. Julius is like a bad penny, baby! You can’t get rid of him that easy.”

B&B fans have been speculating online that Julius Avant might have his sights set on some of the Forrester Family’s fortune – not just his daughters’ well-beings.  But, Obba insists that is not the case and his character is “no hustler.”  The actor explained, “But he’s not interested in the money. He’s not there for that. He’s there for his children. You can’t cast aspersions on him like that. He’s a man who cares about his family. He’s not a hustler.”

Obba Babatunde did make one thing clear during his interview – Julius Avant does not support his daughters Maya and Nicole’s pregnancy plans.  Are you excited to have Julius and Vivienne Avant back on “The Bold And The Beautiful?”  Let us know what you think in the comments below!

‘The Young And The Restless’ (Y&R) Spoilers: Another World’s Jensen Buchanan Joins Cast As Elise Moxley