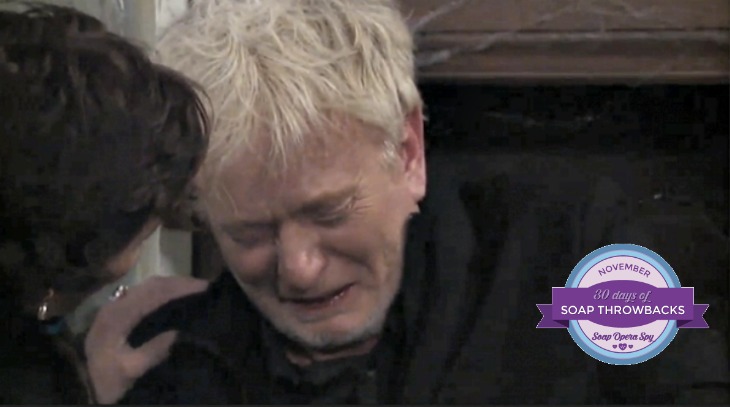 “General Hospital” had one of the most emotional episodes in soap opera history on April 2, 2015. Anthony Geary delivered an amazing performance and proved why he is a legend. Luke Spencer discovers a HUGE family secret, and it sends him in an emotional tailspin. His family feared when he learned the truth he wouldn’t never recover.

Tracy [Jane Elliot], Luke [Anthony Geary], Bobbie [Jacklyn Zeman], and Patricia [Dee Wallace] arrived at the childhood home. Patricia, Tracy, and Bobbie rushed to the abandoned house after figuring that Luke would go there for closure. Patricia Spencer, Luke’s older sister tells Luke a story about when he was just a teenager. She recounts how he killed his mother then beat his father with a bat. She hides the truth from him, so he wouldn’t have any emotional scars. His sisters- Patricia and Bobbie- silenced him, caressing his hands as he prepares to accept his turbulent teenage past.

Luke at first doesn’t believe it; he thinks they must be wrong. After some time, he accepts it and agrees that he needs help to get rid of his demon- his father, Tim Spencer. Luke agreed that he needed help, and he expressed gratitude for them risking all to reach him.

Once Luke accepted his actions, he cried and cried. He said, “What am I supposed to do with this? I killed my mother and my father? How do I go on and live my life from here?” He continues,” This house was a prison to me. I hated it here. I hated Tim Spencer. It turns out; I am just like him. I am.” Bobbie rushes to grab Luke and says, “That is NOT true Luke. You are nothing like him.”

Patricia speaks up and tells Luke it isn’t his fault because he couldn’t remember the events from that night. He blocked it out. She said, “That alone proves you are nothing like him.” She said, “That night, you were in shock. You didn’t remember any of the events that happened. I loved you, so I made the decision to cover up the death with Bill Eckert [Anthony Geary] help. I told everyone he left us after mom died. I protected you. I knew the police would have asked questions, and I wasn’t the police would believe us no matter how much how well we explained it. I told myself that if I stayed out of Port Charles that everything would stay hidden forever, and we’d all be okay. How wrong was I?”

Patricia tells Luke that it was an accident and that their mother would be proud of his bravery. They turn away, and Patricia’s heart gives out, and she passes away in her wheelchair. Luke is riddled with guilt that he caused her death. The breakthrough forced Luke to come to terms with his demons and seek treatment. Do you remember the Fluke storyline?