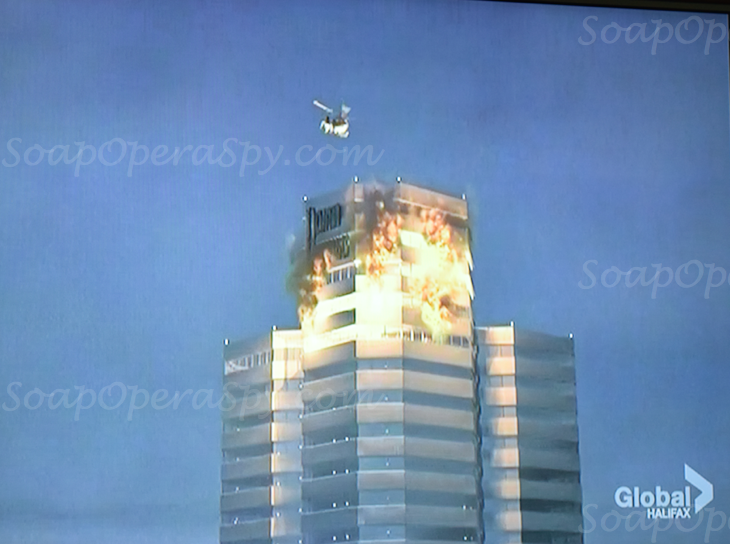 “The Young and the Restless” Wednesday previews are in, and it looks like Stitch [Sean Carrigan] and Ashley [Eileen Davidson] could be in serious trouble. Abby [Melissa Ordway] makes it her mission to find Ashley and Ben and appears to see them in a distance. As the fire increases, a massive explosion sends panic in all those who are trapped in the fiery blaze.

Abby decided to sneak off and search for her mother and Stitch. She knows that they are the most important people in her life and wouldn’t forgive herself if something happened to them. She calls out to them, “Mom, Mom! Ben, Ben!” She doesn’t hear anything, and the smoke is getting pretty thick. She sees something, in the distance, but cannot make it out. Could she see Ashley and Stitch from a far distance?

Ashley and Stitch are trapped in a room and unable to get out. Not only is the building on fire, Stitch has broken his leg and has a punctured lung- and Stitch fears his lung may have collapsed. Ashley is scared they will both die, and she wants to get one more kiss in before they perish in the blaze. She leans in order to kiss him, and he kisses her back. Is it possible that Abby will catch them as she desperately tries to search for them?

As the fire continues to spread, an explosion sends all those trapped in the building in a panic. Cane [Daniel Goddard] is still trapped in the building, and no one knows exactly where he’s located. Adam [Justin Hartley] was knocked out in the stairwell by the mysterious devil. Things aren’t looking good for Jack [Peter Bergman], Phyllis [Gina Tognoni], Adam, Billy [Burgess Jenkins], Stitch [Sean Carrigan], Victor [Eric Braeden], and Ashley [Eileen Davidson]. One of them won’t make it out alive- or will be seriously hurt. Continue to watch “The Young and the Restless” weekdays on CBS.

‘The Young And The Restless’ (Y&R) News: Melissa Claire Egan Named Performer Of The Week After Emotional Scenes Between Chelsea And Adam