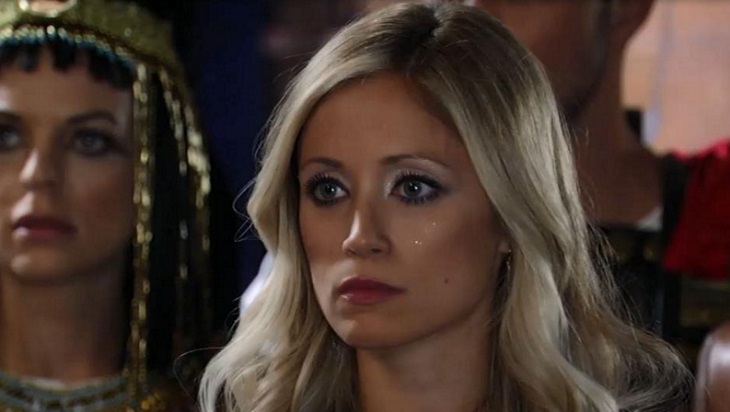 This week in Port Charles is a busy one – Tuesday will see DNA results and a marriage break up – and these ‘General Hospital’ spoilers will get you ready for the November 3rd show.

First, Carly Corinthos (Laura Wright) cleverly got Jake Doe (Billy Miller) to drink from her water bottle so she could have a DNA sample for the doctor. Let’s hope Carly really wasn’t also sipping from the cup. We do have to wonder who she’ll match it against, though. Did Carly pluck one of Michael Quartermaine’s (Chad Duell) hairs or steal Danny Morgan’s sippy cup?

No matter – Carly will get the confirmation she needs then will rush to alert Jake, but events conspire against her. What could it be that stops Carly from giving her BFF the news that he’s Jason Morgan? Down at the docks with Liz Webber (Rebecca Herbst), Jake gets a sense of déjà vu with Liz. He tells her he might have a memory returning and that’s the last thing that Liz wants.

At home, Sam Morgan (Kelly Monaco) is upset that she didn’t figure out Jake’s identity before the wedding but Patrick Drake (Jason Thompson) reassures her that she did everything she could. Later, Sam and Patrick will spend time with Danny and Emma Drake (Brooklyn Rae Silzer) before they head to the wedding and their whole world falls apart. Could be their last good time together!

Kiki Jerome (Hayley Erin) will go off on Morgan Corinthos (Bryan Craig) when Darby Colette (Jesica Ahlberg) reveals that she and Morgan were shagging. Kiki will tell Morgan he broke her heart again and she’s already drunk and belligerent – what’s next? She’ll do something really dumb. Will she stomp out of the Haunted Star and drive drunk? Will Kiki hurt someone in Port Charles with her idiotic actions?

Another relationship in Port Charles may be on the rocks because of the Dante Falconeri (Dominic Zamprogna) cheating scandal – that of Maxie Jones (Kirsten Storms) and Nathan West (Ryan Paevey). Maxie will rail at Nathan for lying to cover up Dante’s cheating. Maxie feels like Nathan should have trusted her with the info and she’s not pleased with him. Will this put a barrier between them?

Valerie Spencer (Brytni Sarpi) confronts Dillon Quartermaine (Robert Palmer Watkins) about playing the wrong sizzle footage at the party and revealing the cheating secret. Valerie is doubly mad when she realizes that Dillon played it on purpose because he assumed that she and Dante were still fooling around behind Lulu Spencer’s (Emme Rylan) back. Dillon’s about to lose a lot of friends.

Down on the docks, Dante chases Lulu and tries to talk reason but she’s furious. Lulu will slap him then rail at him and tell him they’re over. She’s furious. What will Lulu do while angry? Will she takes things too far so that she makes it impossible for them to reconcile? Looks like Dante is going to need a new place to live. Will he go to his mom or his dad? Lulu doesn’t want him at their place anymore.

All this and more on Tuesday’s GH. Don’t miss a moment then tune in to Soap Opera Spy for more ‘General Hospital’ spoilers, gossip and more.

‘The Bold and the Beautiful’ Spoilers: Bill Furious at Ridge’s Influence on Spencer Family – Eric Asks Brooke to Move in the Mansion