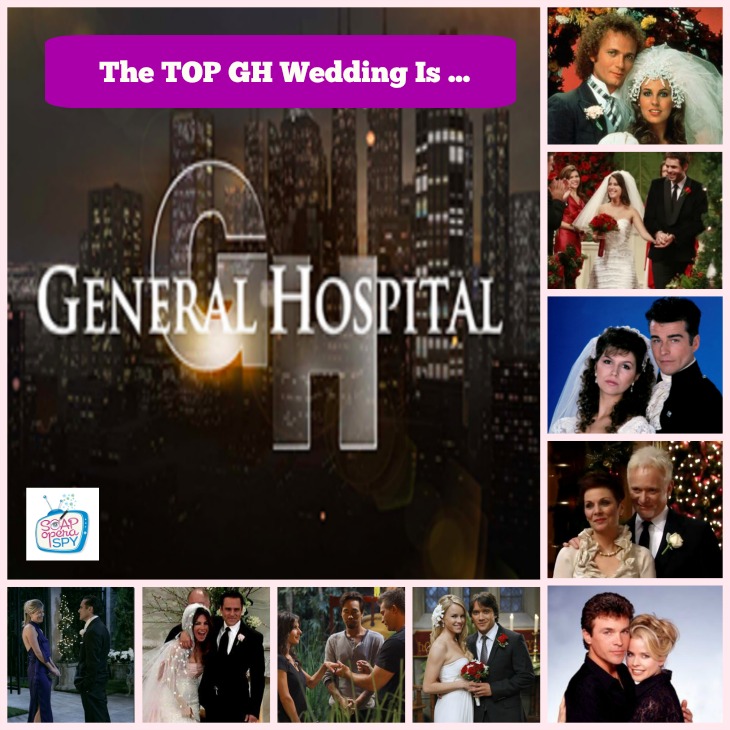 Nuptials are always fun events, but on our favorite soaps are even more delightful. Looking back over the long and storied history of “General Hospital” there are many weddings we’ve been privy to, but which is your favorite? Here’s a quick run down of Port Charles’ residents saying I Do with a quick description followed by a poll so you can vote for your favorite of these 10 GH weddings!

This spur of the moment ceremony seems unlikely especially since Nina loves Franco [Roger Howarth] and Ric loves Liz Webber [Rebecca Herbst]. Plus Ric has been making out with Nina’s mom and plotting to take her money, so it’s not good.

This twice-wed couple was headed for the altar a third time when Luke dumped her to go help former wife Laura find their kidnapped son Lucky Spencer [Jonathan Jackson]. Though Tracy and Luke’s nuptials weren’t on a grand scale, they did have love.

Another twice-wed couple, their first nuptials were sumptuous while their second was in the Floating Rib with loved ones around but a few hiccups. You have to hand it to these two, their love has lasted much longer than almost anyone else in Port Charles.

These two had a long road and three major break ups before they finally made it to their small wedding with just Olivia Falconeri [Lisa LoCicero] to witness it. Since then, they’ve had some ups and downs, baby Rocco and are now in the midst of a potential marriage crisis.

Both the bride and groom wore black in this long-awaited Asian-themed wedding. It wasn’t a fluffy traditional wedding and was more dark and moody much like the killer groom. It was true love but then they were ripped apart. JaSam has another chance now if Liz Webber [Rebecca Herbst] will quit lying.

This marriage was a long time coming for often-wed mobster Sonny and his soul mate Brenda. They finally married but then everything went to hell again and who didn’t ache when Sonny kissed Brenda goodbye at the airport. You have to love those two together!

Robin and Patrick’s first wedding was interrupted by the birth of daughter Emma Drake [Brooklyn Rae Silzer] but their great love can’t save their marriage and they split. They shared another wedding when Robin showed up just in time to break up Patrick’s nuptials with Sabrina Santiago [Teresa Castillo].

Pick a wedding, any wedding. These two have had three in 2000, 2002, and 2007. Sonny married three of the four actresses that portrayed Carly – Sarah Brown, Tamara Braun and Laura Wright. Didn’t he ever notice that his bride’s face changed but not her name? All good ceremonies!

This one is bittersweet since Anna just lost true love Duke just a few weeks ago, but you had to love their beautiful and traditional Scottish ceremony. Even though Duke later faked his death to keep Anna and Robin safe, their loved survived the ages and they were reuniting but then Duke was gunned down.

No discussion of Port Charles weddings is complete without this duo. The most famous wedding in soap opera history drew 30 million viewers. Superfan Elizabeth Taylor even showed up for the event playing Helena Cassadine. They were married again on their 25th anniversary, but that one was a sham.

So fans of GH, which of these 10 weddings was your favorite?  Vote in the poll below!  If we missed one of your favorite GH weddings lets us know in the comments!