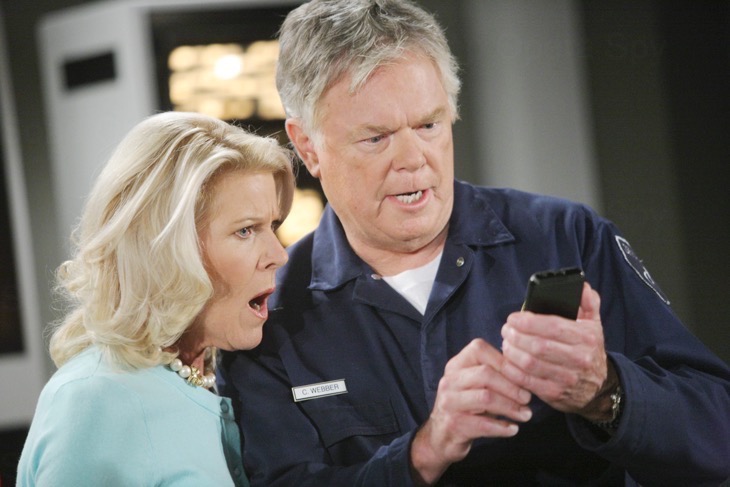 “The Bold and the Beautiful” Pamela Douglas [Alley Mills] debuted as Stephanie Forrester’s [Susan Fannery] younger sister Pam in 2006. Pam is a quirky bubbly character who loves to bake.  Pam is always whipping up a batch of her  famous lemon bars for her co-workers at Forrester Creations.

Pam had a strained relationship with her big sister Stephanie for most of her life.  There was a lot of jealousy because Pam was the one who put her life on hold to take care of their ailing mother. Stephanie was not on very good terms with her mother because she felt her mother allowed her father John to molest her as a child.  Stephanie’s Mom was not strong enough to stand up to John because she was also being physically abused and was afraid of him so she did not help her daughter.

Pam eventually stood up and admitted that her dad did molest her sister Stephanie but she explained she was to afraid to help her sister when she was younger. Eventually the two sisters found a way back to each other and Pam became the Forrester Receptionist a job that she adores and still holds to this day.

Pam has not had the easiest life.  She has had serious issues because she grew up watching her father abuse her mother and sister. It’s no surprise that she was diagnosed as Bi-Polar.  Pam also has had serious trust issues with men because of her father’s abusive ways and remained a virgin until 5 years ago. Then she met Stephen Logan [Patrick Duffy] the father of the Brooke, Donna and Kate who took her virginity in a cruel scheme. Stephen pretended to love Pam although he did not and took advantage of her.

Related: ‘The Bold And The Beautiful’ Comings And Goings News: Pierson Fode Joins The Soap As Thomas Forrester!

Pam gets along with most people at Forester Creation but if she doesn’t like you watch out!  Pam has very creative ways of letting you know exactly how she feels. Pam once joined forces with Steffy Forrester [Jacqueline MacInnes Wood] to sabotage “The Hope For The Future line.”  Pam and Steffy took the letters “P” and “E” out of the sign leaving it to read “Ho For The Future.”

Pam is not a fan of Donna Logan [Jennifer Gareis ] when Pam thought a man that she had her eye on liked Donna, Pam put itching power in Donna’s nightie! Pam is not like most devious minded people on B&B her antics are more high schoolish, she never really tries to hurt anyone.

Which brings me to Pam’s latest best buddy Charlie Webber [Dick Christie]. Charlie is a security guard who we don’t know much about except that he seems to be an honest, intelligent good man who is totally underestimated by his peers. Charlie has always had an unspoken crush on Pam and is always looking out for her. These two characters are the most refreshing thing on B&B.  Especially when they are in the middle of one of their capers.

Their “relationship’ is childlike and innocent, a quality daytime soaps are missing these days. Pam and Charlie are a MUCH NEEDED breath of fresh air. They are not teenagers or spring chickens, they are just regular people, doing real things,  with real feelings like us.

These two make the most of every moment, when I see these two I am reminded of that quote “live , love and laugh.” With these two we always seem to be on a Sherlock Holmes adventure with either a big Jewlery heist at Forrester, Maya’s [Karla Mosley] estrogen pills  you name it they have it!

Pam and Charlie have all of the qualities of a different kind of B&B Super Couple, their playful relationship consists of laughter, honesty, loyalty, and an obvious mutual admiration for one another. They do love each other but just have not said the “L” word yet . Charlie adores Pam. The best scenes are when these two sleuths get together trying to find out the office gossip, dirt or putting their ears to closed doors. Pam with her home cooking at Thanksgiving and Holidays gives the soap back what it has lost , sense of genuine family and warmth.

Even though Charlie and Pam are not “officially” a couple we could NEVER see either one with anybody else. We are hoping Bradley Bell  will give Pam and Charlie a lot more air time.

What do you think SOS’ers do you want to see more of Pam and Charlie?