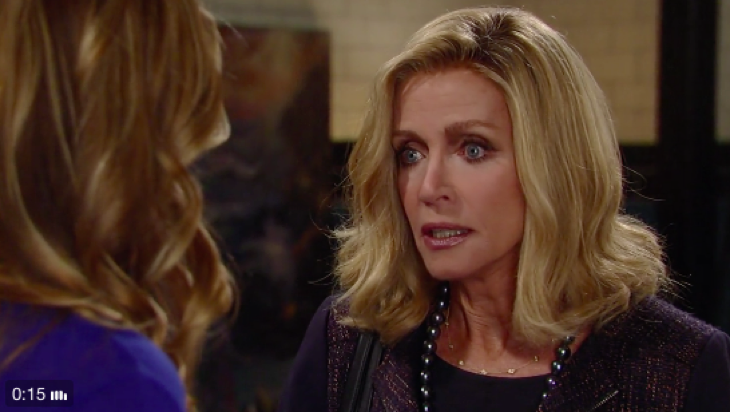 Friday is all about murder and lies in Port Charles. These ‘General Hospital’ spoilers will get you ready for the August 21 show.

Madeline Reeves [Donna Mills] is keeping murderous secrets it seems. After Maddy tried to get Nina Clay [Michelle Stafford] to sign some tricky documents to help she and Ric Lansing [Rick Hearst] get hold of her money, Nina started thinking about her mom, Silas Clay [Michael Easton] and motives for his murder. Nina calls up baby bro Nathan West [Ryan Paevey].

Madeline and Ric are best served if Nina doesn’t know who kidnapped the baby so she doubts herself. That meant Silas needed to go. But they didn’t know Nina already knew the truth from Franco courtesy of Ava Jerome [Maura West]. A frustrated Madeline will run into Carly Corinthos [Laura Wright] and they talk about their troubled children and the stress of dealing with them.

Carly is pursuing the theory that Morgan Corinthos [Bryan Craig] may be bipolar like his dad Sonny Corinthos [Maurice Benard] and Maddy has been dealing with Nina’s crazy antics for a while now. Of course, Madeline wants Nina to be crazy so she and Ric can steal her money. Ric will soon find himself on the other side of a criminal case when he’s arrested and loses his DA seat.

At the courthouse, Franco isn’t happy to see that his dad Scotty Baldwin [Kin Shriner] called Denise/Ava to the stand. Scotty will grill her and will reveal her for what she is. The question is, does Scotty get Denise to admit she’s really Ava back from the dead or that she’s screwing around with Morgan? Both? Either way, Kiki Jerome [Hayley Erin] will be devastated.

Julian Jerome [William deVry] is also focused on Ava – happy his felonious sister is back from the grave. But when Alexis Davis [Nancy Lee Grahn] questions him about why he’s so focused on Denise all of a sudden, Julian will have to keep the Denise is Ava secret from her – at least until he can get the evidence against Ava away from the DA so she’s not at risk for murder charges.

On the subject of Julian, Olivia Falconeri [Lisa LoCicero] goes to see her other mobbed up baby daddy to talk to him about Julian. Olivia wants to know if Sonny thinks Julian is really out of the mob – he doesn’t. Olivia and Sonny catch up and gossip about Julian, but will Olivia reveal to him that baby Leo is alive? Don’t do it Olivia!

Hayden Barnes [Rebecca Budig] is due for a check up. She’ll go in to see Patrick Drake [Jason Thompson] and recover some memories that lead her to tell Patrick that Jake Doe [Billy Miller] is Jason Morgan. Patrick will explain to Jake why Liz Webber [Rebecca Herbst] and Sam Morgan [Kelly Monaco] are bitter rivals. Jake will soon start seeing Liz in a different light.

Dillon Quartermaine [Robert Palmer Watkins] will spend time catching up with Lucas Jones [Ryan Carnes] about what’s going on with each of them. Will Lucas spill to Dillon that the engagement is off? Will Dillon spill to Lucas that he’s struggling with renewed feelings about Lulu Spencer [Emme Rylan] that he shouldn’t be having? Should be an interesting chat…

Last, Michael Quartermaine [Chad Duell] shares with Sabrina Santiago [Teresa Castillo] his parents’ concern about Morgan and the possibility his brother might be bipolar. Since he’s not Sonny’s blood son, Mikey is safe from the mental illness curse, but Morgan may be crumbling. Sabrina wants to know if Michael can forgive Sonny and Carly enough to go to their wedding.

After you watch today’s show, be sure to check back with Soap Opera Spy for daily ‘General Hospital’ spoilers and a look ahead at the action on next week’s GH.