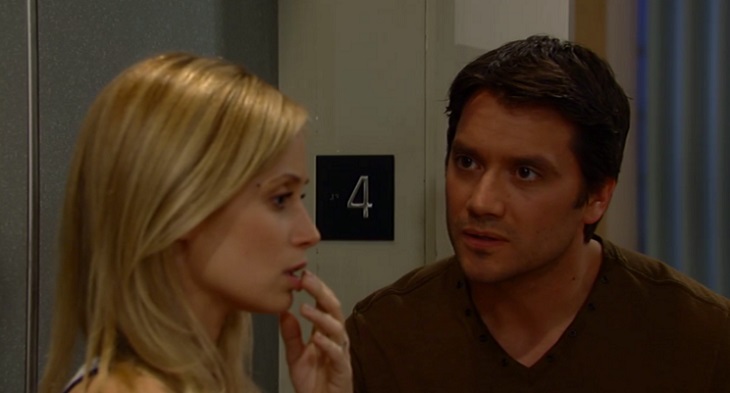 The love quadrangle of Lulu-Dante-Dillon-Valerie is just starting to heat up and ‘General Hospital’ spoilers indicate we’ve got lots more drama to look forward to with this love-challenged group of clueless couplers and de-couplers. With Lulu Spencer [Emme Rylan] developing a nasty new habit of jumping to the worst possible conclusions, is her marriage to Dante Falconeri [Dominic Zamprogna] doomed? This week, we saw Dante lose it when Lulu admitted to hacking his work email and he said maybe they are over and walked away.

Will this send Lulu running to Dillon Quartermaine [Robert Palmer Watkins] with tears in her eyes and revenge on her mind? We already saw Lulu come close to bedding Dillon when she was mad at Dante, but not she’ll be feeling doubly damaged and may find consolation in Dillon’s eager arms. However, will Dillon spurn her too? Of course we don’t mean to imply that Dillon doesn’t want Lulu – he does and we all know it. But Dillon is playing for keeps and doesn’t want to be a tool for revenge sex and nothing more.

Because Dillon wants Lulu in his life for good and is hoping for a genuine and long-term relationship with her, he may not take her up on her offer for a quick roll in the hay (or if it’s at the Quartermaine mansion, a roll in high thread count Egyptian cotton sheets). Interestingly, if Dillon does put the brakes on, that could make Lulu want him even more. Lulu will be off the rails in coming days because her whole life has imploded. Her baby plans have fallen apart, her marriage is wrecked, and she’s on thin ice trying to play victim.

Sure Dante cheated, but it was her lies that laid the groundwork for that incident. Why would Dante assume she was platonically sharing a hotel room with her ex Dillon? Who on Earth would think that? Dante was acting out because he was hurt and all signs pointed to Lulu betraying their marriage vows. Plus Dante has apologized profusely. But then Lulu betrayed his trust by nearly bedding Dillon, hacking his email and generally being the b-word. She doesn’t really have the moral high ground at this point and she may have pushed Dante too far.

What could further complicate this mess is if Dante gets in Dillon’s face and Dillon tells Dante that he and Lulu made out and undressed each other. You know if Dillon is annoyed with Dante (and these two bring out the worst in each other), he won’t keep it to himself that he was lip locking the guy’s wife – and that would just heighten the tension and drive a larger wedge between Dante and Lulu. All of this would make it more convenient (and justifiable) for Lulu to indulge herself with Dillon since she believes her marriage is over and done.

Do you guys think Lulu will wind up with Dillon?  Or will she and Dante work out their issues?  More on the Dante-Dillon-Lulu-Valerie circus as events unfold – check back with Soap Opera Spy often for more ‘General Hospital’ spoilers, gossip and more.

‘General Hospital’ News: What Is Lisa LoCicero Hiding and Could Her Secret Talent be Revealed at the 2016 Nurse’s Ball?