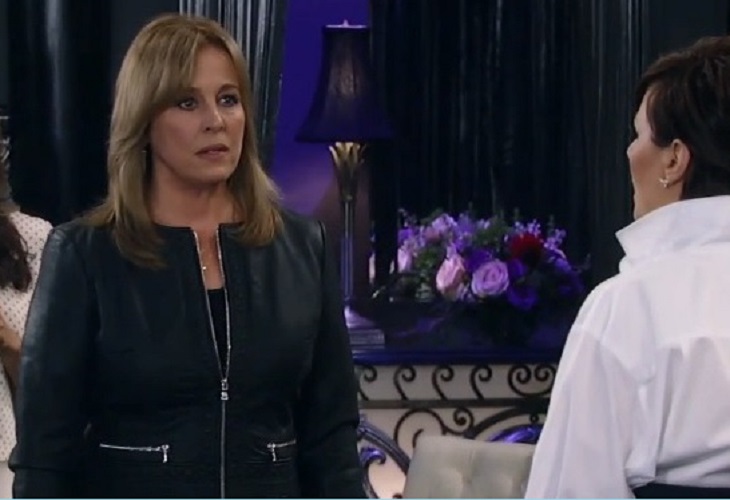 “General Hospital” Genie Francis sat down with TV insider to talk about her multi-year contract, her storylines, and the new women team of writers. Not only is Laura Spencer an iconic character on the show, but she is also one of the few people that are in the loop about Jason Morgan [Billy Miller] true identity.

Good news, Genie Francis will be calling “GH” her home until late 2018. That’s right, folks; she just scored a three-year deal with the soap opera. She noted, “A three-year deal is a very big commitment from ABC these days. It is much too soon to know the storylines they plan for Laura, but the contract means they WANT to write for Laura and that alone is exciting.”

Genie said that the new head writers, Jean Passanante and Shelly Altman seem very nice. She noted she had only passed them a few times as they have been swamped with the Jake reveal and tying up loose ends. “They have been pretty busy trying to pick up the pieces left behind from the former writer. They have been extremely stressed out, and I didn’t want to bother them. Frank [Valentini] wants Laura to have a love interest, so I am sure they are going that route in the coming months,” Genie explained.

Genie stated that Laura felt it wasn’t her place to tattle to Port Charles that Jake is really Jason. She urged [gently] that Liz came clean. “To tattletale would have been wrong, so I think Laura made the right choice,” Genie noted. Laura is terrified of her son, Nikolas [Tyler Christopher]. She knows he is holding this secret and is not happy with his reasoning. “That’s not how Laura raised her children, but then again, she didn’t raise him- the Cassadine’s did,” Genie said.

Related: Will Jake Doe Stay With Liz After The Nov 6 Reveal – Or Will Jason Morgan And Sam Get Their Happy Ending?

Genie also noted that she found it strange that no one is worried about little Jake after being Helena’s [Constance Towers] prisoner all those years. “Laura was a prisoner of the Cassadines too, and she knows what kind of effect it can have on someone, especially a child so young. Her maternal instincts are spot on, in this case,” Genie explained.

Genie Francis said that she feels so blessed to be the longest running contract player on the show right now. She explained,  “I never thought I’d see this day. It’s such a surprise. As long as there were a Luke and Laura, I felt I always had to stay in that place. It’s nice not to have to do that anymore and to get past being the eternal ingénue I love playing the mature Laura, the matriarch. I relate. Getting older doesn’t mean becoming less of ourselves, it means becoming more of ourselves. You’re not so hot under the collar and quick to act. Things that were once so life-and-death important no longer seem that way. [Laura is] at that point in life where she doesn’t much care what other people think. And I so love that about her!”

Are you glad Genie Francis is back in Port Charles for good? Who do you think would make a great romance possibility? Do you think she will play a part in revealing Jason’s identity?