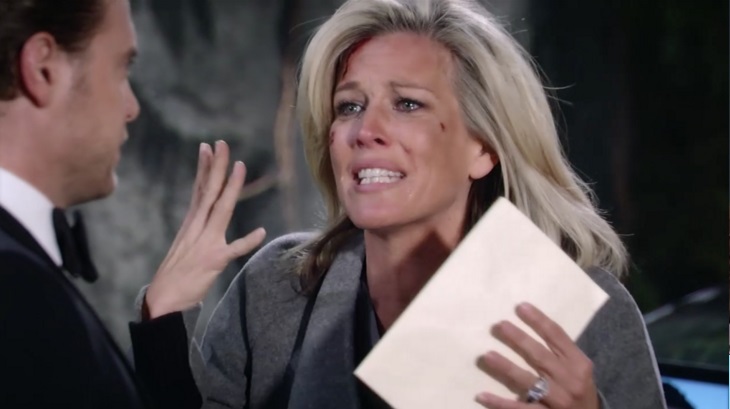 “General Hospital” spoilers indicate that there’s going to be major helpings of guilt to go around once everyone realizes that Jason Morgan was right there with them as Jake Doe (Billy Miller) and absolutely everyone failed him – even his mom, wife and best friend.

Jason’s best friend Carly Corinthos (Laura Wright) and his wife Sam Morgan (Kelly Monaco) will feel the worst about letting Jake sit for so long with no idea that he had loved ones, friends and even kids close by. Jake has felt abandoned and untethered in this world. Yet he had so many resources so near – had they just seen through to who he really was.

Monica Quartermaine (Leslie Charleson) liked Jake and felt an affinity for him, but she didn’t recognize the son she raised as her own. But, to be fair, since Jason had that first life-changing car wreck and decided to take up with Sonny Corinthos (Maurice Benard), be a mob enforcer, and shake off the Quartermaines, they haven’t been uber close.

In contrast, Carly and Sam should have known him. Both have been intimate with him, both had him in their lives on a daily basis, and the two would probably argue over who knows him better. Yet neither knew that Jake was Jason. And that’s what going to make them both miserable after the big reveal later this week. But Sam will have more to kick herself about than Carly.

Carly, at least, felt an immediate affinity for Jake and was one of his first champions in Port Charles even when everyone else saw him as dangerous, an agent of chaos, and tool of Helena Cassadine (Constance Towers). Carly befriended Jake when he was utterly alone and forced him to be her friend, almost against his will.

Carly has been there for Jake consistently so when she saw his identity on Damien Spinelli’s (Bradford Anderson) reconstruction program, it all clicked for her. But even though Carly has been supportive of Jake, she will feel horrible guilt over not knowing he was Jason so she could help him get back to his family.

Sam will feel much worse about not knowing her husband. After all, Jake was even at her side on their anniversary and went through a vow renewal with her and yet she didn’t recognize him as Jason. Meanwhile, Liz Webber (Rebecca Herbst) recognized something in Jake right away, when he was first brought into the ER. Liz fell for Jake almost from the get-go.

It’s like her heart recognized his heart despite the change of face. Now most fans don’t want Liz to end up with Jason but, you have to admit, despite all the lies, she’s loved him since the moment he walked back into town – and for many years prior. What’s important to also realize is that Jake really does love Liz – and still will even once he knows he’s married to Sam.

Jake won’t remember Sam – he’ll only know his love for Liz. Sam will feel terrible guilt that she’s gotten engaged to Patrick Drake (Jason Thompson) – and possibly married (according to some “General Hospital” spoilers) while Jake was just around the corner playing house with Liz. Sam will be kicking herself for sure over all the missed moments she should have recognized.

When Jake took her for a ride on the motorcycle, when they met at Noodle Buddha and a hundred other small moments… Jake will forgive her and explain that she couldn’t have known but Sam will not be so easy on herself and will absolutely think she should have known. What will make it harder on Sam is that Jake won’t remember their love while she’ll be haunted by it.

The fallout from the ‘Jake is Jason’ reveal will be far-reaching and will spell torment for many Port Charles residents who will feel like they failed Jake – not only for not recognizing Jake as Jason – but, in some cases, for lashing out at Jake for actions he couldn’t control while under Helena’s mind-control chip. Just think how Sonny’s going to feel…
Stay tuned to Soap Opera Spy for more “General Hospital” spoilers on the Jason reveal, the botched Liz and Jake wedding and so much more!