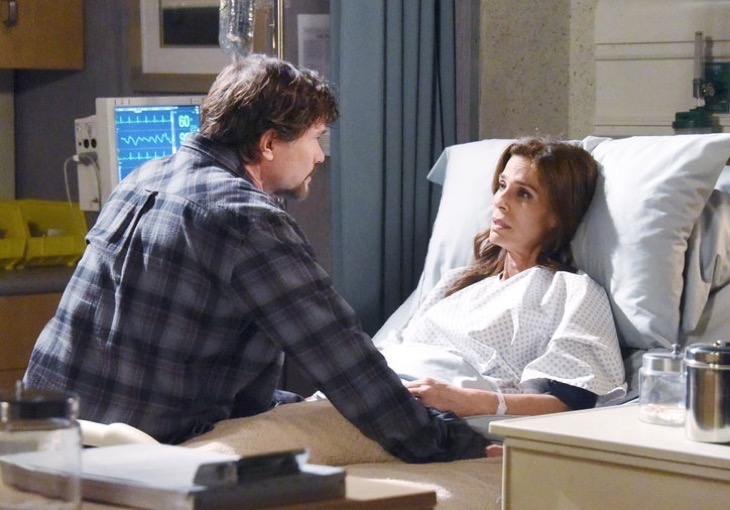 “Days of Our Lives” spoilers reveal that Bo (Peter Reckell) and Hope (Kristian Alfonso) will soon be on the path to reconciliation. Unfortunately, their reunion will be short-lived. Jason47’s “Days” website is reporting that an Australian magazine gave away some plot details and they’re not pleasant. DOOL spoilers tease that Bo is dying of a serious illness and he doesn’t have long to live.

Once Kayla (Mary Beth Evans) confirms his fate with medical tests, Bo will be faced with the terrible task of telling Hope. It’s not going to be easy after all they’ve been through. Bo would love nothing more than to stay with Hope in Salem and make up for lost time. However, the same can’t be said for Peter Reckell. It appears Reckell wasn’t looking for a long-term return to the soap business, but he agreed to come back to give “Bope” a fitting end.

Since Reckell has chosen not to stick around, you could argue that “Days of Our Lives” writers are taking a smart route with a disease storyline. This way Bo isn’t abandoning Hope and they aren’t breaking up. They can maintain their supercouple status, but Hope will be able to move on without guilt. “Days” rumors hint that a pairing with Rafe (Galen Gering) could be coming down the road, but Hope will need to grieve first. Caroline (Peggy McCay) will also have to deal with this tragic loss.

Will’s (Guy Wilson) murder hit everyone pretty hard and Bo’s death will only add to the heartbreak. Victor (John Aniston) and Caroline will seek comfort from each other, but it’s still going to be tough to let go of their son. As for Hope, it seems she’ll turn to a revenge mission to numb the pain. Hope will hold the DiMeras responsible for Bo’s untimely demise.

Related: Will Hope Forgive Bo And Reunite With Him After Aiden Nearly Killed Her? VOTE!

DOOL spoilers say Steve (Stephen Nichols) will try to discourage Hope from going after the DiMeras, but it probably won’t do much good. It looks like the feud between the Bradys and the DiMeras is about to heat up. Stick with “Days of Our Lives” for updates on Hope’s quest for vengeance.

So “Days” fans, what do you think about the news that Bo is being killed off? In light of Reckell’s short stay, do you believe this was the best way to wrap up his run on the NBC soap? Will Bo and Hope get the closure they deserve? Let us know what you think in the comments below and don’t forget to check Soap Opera Spy often for the latest “Days of Our Lives” spoilers, rumors, updates and news.

‘The Bold and the Beautiful’ Spoilers: Maya Fears Nicole Is Having Second Thoughts About Surrogacy – Nicole Awaits Outcome of Pregnancy Test