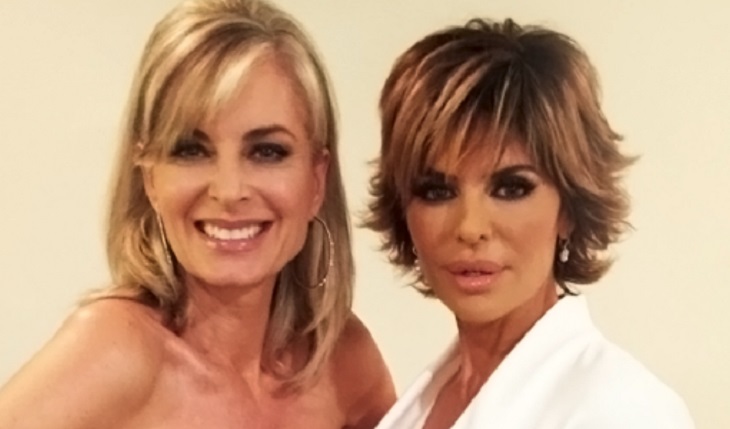 BravoTV released an exclusive clip featuring “The Young and the Restless” star, Eileen Davidson [Ashley Abbott] and “Days of Our Lives” alum Lisa Rinna [Billie Reed]. In the video, Eileen and Lisa reveal how they got their lucky break in soap operas if they are like their iconic characters in real life, and if there was anyone they didn’t mesh with on the set on “Y&R” and “DAYS.”

Lisa Rinna got her start on “Days of Our Lives” in 1992. She read for seven different soap operas, and she was getting extremely frustrated that she will never get a job in the industry. She would get past the first audition, move on to the screen test, and would get passed over for a more experienced actress.

“I went in to read for Billie Reed in 1992. I did a screen test with Robert Kelker –Kelly [Bo Brady], and I got it. I hated Robert Kelker- Kelly. He hated me with a passion too. We were a volatile combination together, and from afar it looked like love, but it wasn’t We hated each other.  I will have to say we had sexual chemistry on camera. So, that was some darn good acting right there,” Lisa said,

“Billie Reed is like Kim Richards, Brandy Glanville, Myself [Lisa Rinna], Kyle Richards, and a smudge of Yolanda Foster. People seem to connect to Billie. Really, Billie was a f*cked up  mess [ laughed]. She got herself in situations that were tricky and sticky and hard to get out of. Does that sound familiar?  That’s a soap secret for ya right there,” Lisa joked.

Eileen Davidson got her break in 1982 when she auditioned for the role of Ashley Abbott on “The Young and the Restless.” She noted she had auditioned for “General Hospital” several times, but she was never given a part. “It happens. You won’t like everyone you work with and sometimes any kind of emotion translates on TV, so if it’s real you see and the audience will react to it. There are actors whom I haven’t gotten along with off camera, sure,” Eileen shared.

Eileen refused to tell her fans any of the actor’s that she was particularly fond of once the camera stopped rolling. “It wouldn’t be a secret if I told you, would it,” Eileen joked. “Who am I most like Kristen or Ashley? Well, I am not evil, and I don’t rape priests, so that leaves Ashley [laughs]. I will have to say, my sense of humor is much more like Kristen’s,” Davidson revealed.

Eileen compared Ashley to Lisa Vanderpump, “Lisa is a high-powered business woman who is running multiple compares and keeping it all together- that is definitely just like Ashley Abbott.”  Eileen noted that everyone had a little Kristen Dimera in them, waiting to come out when you feel threatened. “You just can’t go around killing people and raping priest is all,” Eileen says.

Watch the clip below and tell us what you think about Eileen and Lisa’s soap secrets. Are you surprised by Lisa’s admission that she didn’t get along with Robert Kelker-Kelly?

‘The Young And The Restless’ News: Justin Hartley Thanks ‘Y&R’ Fans For Support