Another WorldDays of Our Lives 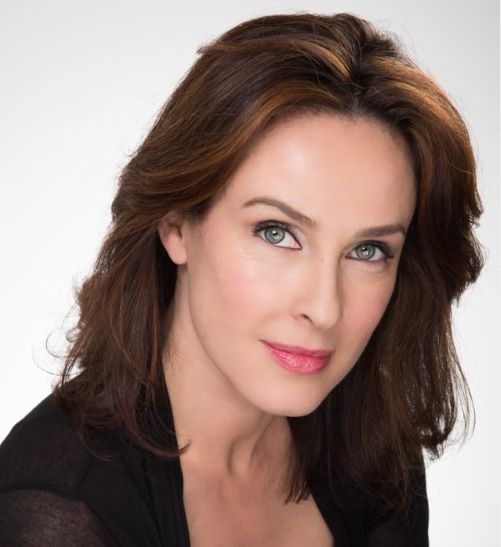 “Days of Our Lives” casting news teases that Alla Korot has begun filming as a character named Janet Bernard. The only information at this time is that Korot is shooting her first episode on January 4, 2016. Alla tweeted on December 20, “Heading over to @DaysofourLives shooting 1st episode on Jan4:)) look out for Janet Bernard.”

Remember, “DOOL” tapes approximately six months in advance so viewers may not see Janet Bernard pop up in Salem until perhaps June or July 2016. This gives TPTB plenty of time to tantalize fans about the character and the possible storylines in which Janet will be involved.

Alla Korot is a soap opera veteran and has guest-starred on several primetime dramas as well. “Another World” fans may remember Alla as Jenna Norris from 1991 until 1992. “All My Children” viewers might remember Dr. Allison Doyle who stayed around Pine Valley from 1997 until 1998. If you were a fan of the “GH” spin-off “General Hospital: Night Shift” you may recognize Alla from her role as Stacy Sloan in 2007. 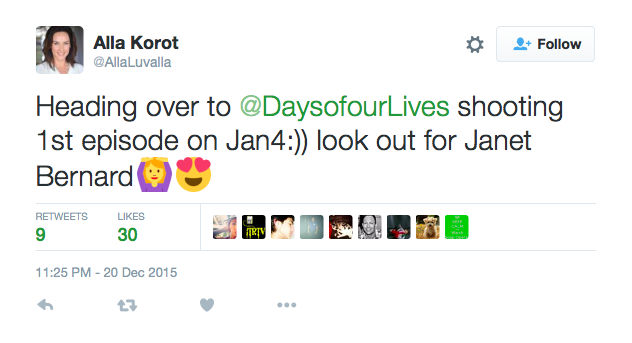 “Days of Our Lives” fans how you think Janet Bernard will fit into the storylines on “DOOL? It sounds as if Janet could be big trouble for the residents of Salem. Could Janet come to town to shake things up between Patch [Stephen Nichols] and Kayla [Mary Beth Evans]? Perhaps a love interest and/or partner in crime for Eduardo [A Martinez]? We’ll just need to stay tuned and find out.

‘The Young And The Restless’ News: Scott Elrod Going To Be A Dad – Announces Girlfriend Vanessa Is Pregnant