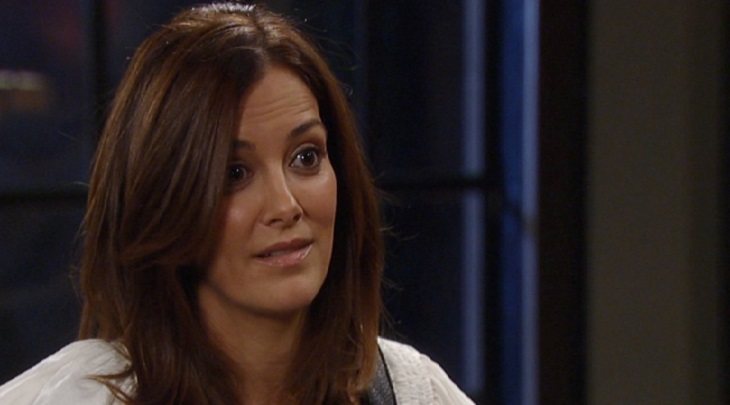 When “General Hospital” approached “AMC” alum, Rebecca Budig about a short stint on the ABC daytime soap opera last year, she wasn’t certain if she wanted to come back in the daytime scene. Rebecca Budig told ABC Soaps in Depth, she was enjoying her time with her one-year-old daughter, Charlotte, and wasn’t sure she wanted to give it up. She decided to give the role of Hayden a shot. And, it’s a good thing too, because the short role turned into a huge contract deal for her.

Just how huge of a contract?  It was reported that “General Hospital” and Rebecca agreed on an unprecedented four-year contract deal, allowing her to develop her new character, Hayden for the “GH” fans.

Hayden is known as a troublemaker who came into Port Charles to trick Jake [Jason] [Billy Miller] into believing that they were married before he lost his memory in his accident. It wasn’t long before she had to admit that she was never married to the handsome stud, after Elizabeth Webber [Rebecca Herbst] and Carly Corthinos [Laura Wright] suspected that Hayden may be lying about knowing Jake.

Hayden learned of Jake’s true identity; Nik Cassadine [Tyler Christopher] figured out that his grandmother had ‘programed Jake about the same time, and he took action to silence her. After a series of events, Nik felt he had to order a hit on Hayden. She was shot and lost her memory. In the end, Nik because the man she fell in love with as she recuperated.

Related: 5 Reasons We Want to See More of the Port Charles Kids

Rebecca Budig stated the working with “GH” was a dream come true, so she knew she had to accept the role. She explained she watched the show when she was younger, and loved the quality of the show. Budig explained when she arrived on the set she felt at home. “It’s like a big family,” Rebecca stated.

‘The Young And The Restless’ News: Melody Thomas Scott Crowned ‘Y&R’ Performer Of The Week – Emotional Scenes With Sage Newman