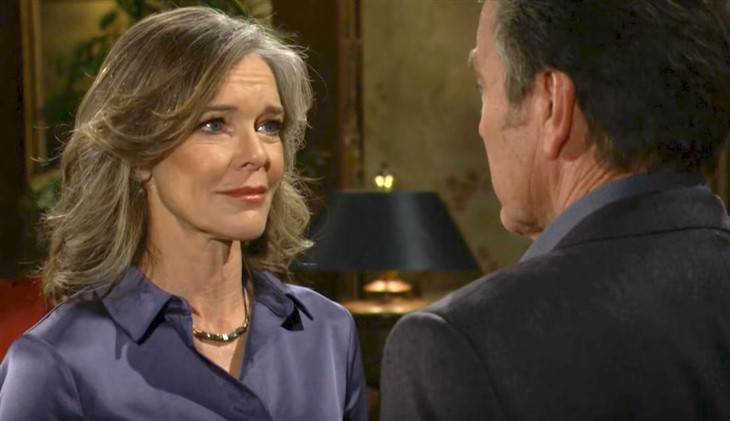 The Young and The Restless spoilers and updates tease that Jack Abbott (Peter Bergman) and Diane Jenkins (Susan Walters) will scramble and panic. Their happily ever after won’t last for long if Jeremy Stark (James Hyde) returns seeking revenge!

The Young And The Restless Spoilers – Framed

Stark knew he was framed when Chance Chancellor (Conner Floyd) came to his hotel suite and he hadn’t been to Chicago. Yet there was proof tying him to the theft of Nikki Newman’s (Melody Thomas Scott) necklace – including the necklace itself, which Diane planted! At the time, Chance felt satisfied that the Chicago Police were satisfied with the situation, but he may get doubts himself the more he thinks about it.

Chance could think that things are simply much too tied up in a neat little package. He will undoubtedly have second thoughts about his arrest and even though Stark has the criminal record, he may actually be innocent of this crime.

The Young and the Restless spoilers say that Jack and Diane may think it’s over now that the case is in the bag and he’s in the pen, but if Stark has a good defense attorney he’ll get off. A competent defense attorney who uses a private investigator could easily pick holes in the case and prove a frame, and Jack and Diane will be the number one suspects.

Nikki already noted Jack knew the security code to the Newman apartment in Chicago and Diane knew Stark intimately; Chance himself may even reinvestigate the case. It was a total turnoff for the law and order Chance to have to go along with Ashland Locke’s (Robert Newman) fabricated fatal car wreck, and he’s disillusioned. He may agree Stark belongs behind bars but in this case, he may find that the man’s just not guilty.

The Young And The Restless Spoilers – Revenge Might Get Ugly

Once Stark has been exonerated of this break in and theft, perhaps the case even kicked out of court, revenge might get ugly and they could be in real danger. Diane’s the one who’s suggested that Stark is a sinister criminal who’s into human trafficking and other assorted nasty stuff, calling herself a money mule for him. She did seem truly terrified of him and apparently had convinced Tucker McCall (Trevor St. John) to help her get away back in LA but then there could be other explanations.

It may be Diane who framed Stark for his crimes back in Los Angeles and stole money from him as he asserted. Prison time can make people really mean especially if they were innocent to begin with!