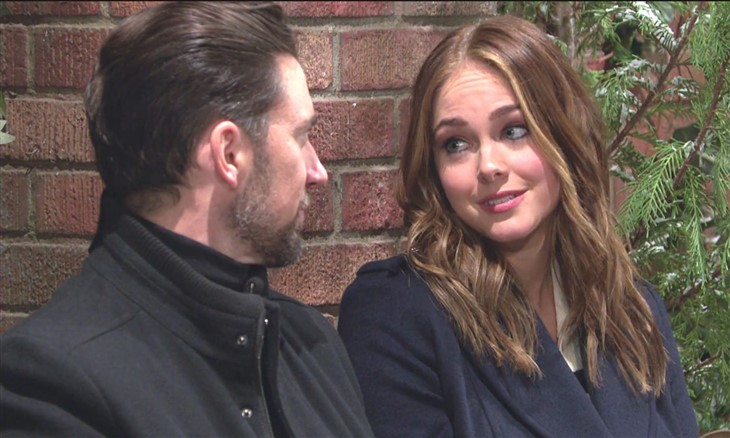 Days of Our Lives spoilers tease that Chad DiMera (Billy Flynn) had a terrible year in 2022. His wife, Abigail DiMera (Marci Miller) was brutally murdered last summer and Chad spent most of the following weeks trying to discover who murdered his wife. Eventually, the killer was revealed to be Clyde Weston (James Read) who was sent back to prison. It was around this time that Stephanie Johnson (Abigail Klein) returned to Salem.

Days Of Our Lives Spoilers – Chad DiMera Went To Work With Stephanie Johnson!

Stephanie returned to Salem to help work on Paulina Price’s (Jackee Harry) campaign for Governor. The two of them became even closer as they worked together and they almost made move after a huge success at work. But Chad stopped things because he still wasn’t ready to move on. Abigail’s death was too fresh and sleeping with Stephanie felt like a betrayal of his wedding vows. Stephanie understood, and the two of them remained both friends and co-workers.

Although she couldn’t stand Alex Kiriakis (Robert Scott Wilson) when they met, he eventually won Stephanie over and they began dating. But Chad’s continued presence made Alex jealous. Alex finally had enough and turned on Stephanie’s phone because Chad was calling and the two of them made love for the first time. Stephanie later discovered that Chad had been calling because Stephanie’s mother Dr. Kayla Johnson (Mary Beth Evans) was on her deathbed. Stephanie was deprived of being able to say goodbye to her mother. She later asked Alex if he turned off her phone and he admitted it. Stephanie promptly ended things with Alex.

Days Of Our Lives Spoilers – Stephanie Johnson Will Lean On Chad DiMera!

Losing her mother will hit Stephanie hard, so look for her to turn to Chad. The two of them may start to make love once again, and this time Chad may be ready. Chad and Stephanie have been there for each other as friends for months now and after what Alex did, it may be time for Chad and Stephanie to explore their feelings for one another. But can Stephanie really forget Alex?

Did Alex ruin his relationship with Stephanie forever? Or is there still a chance for them? Is Chad ready to move on after Abigail’s tragic death? Anything can happen in Salem so stay tuned to Days of Our Lives streaming every weekday on Peacock. And don’t forget to check back right here regularly for all your Days of Our Lives news, information and spoilers!