Days Of Our Lives Spoilers: Wendy Spies Allie, Suspects Cheating With Alex, Will She Tell Chanel? 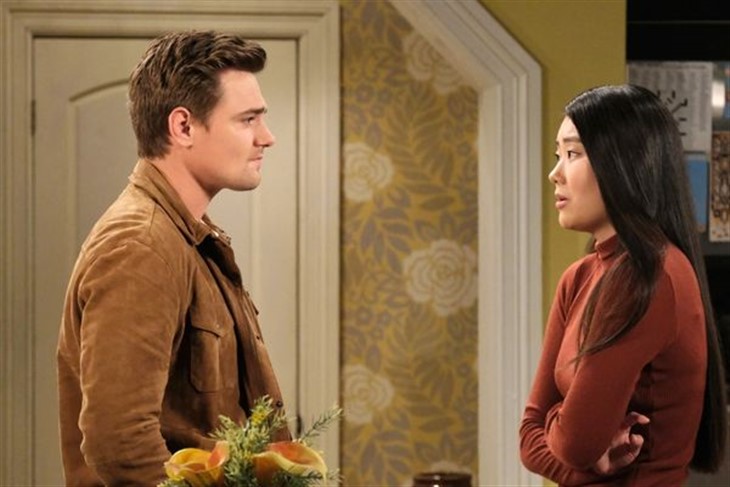 Days Of Our Lives Spoilers – Old Feelings Stirring Up

Johnny DiMera (Carson Boatman) and Chanel realized their old feelings for each other were getting stirred up as they helped John Black (Drake Hogestyn) set up a photo montage. They were on the roof of Salem University Hospital where John wanted to give his dying wife, and Johnny’s grandma, Marlena Evans (Deidre Hall) a special experience. Johnny and Chanel very nearly kissed, and Allie found out about it and got jealous even though everyone was emotional-for Johnny, he was losing the second grandma in a month.

It seems Johnny never really did get over Chanel, and Wendy’s got a stake in that too – she’ll be torn between telling Chanel about Allie and wanting Johnny for herself. Wendy and Johnny were pretending to be involved when they were spying together, but there very definitely was and is a bond.

Chanel tries to squash her old feelings for Johnny since she’s committed to Allie, but Allie can’t get past it. Chanel might stay with her mom for the time being since Allie and she are squabbling, giving Allie the perfect opportunity to cheat with Alex. Since Wendy lives with the two girls, she’ll have a front row seat to everything, and this is much different than the threesome both Allie and Chanel had with Alex. There’s a chance that Allie and Alex may not actually have anger and grief sex behind closed doors, since Alex is not over Stephanie Johnson (Abigail Klein). But Wendy won’t know that, because obviously she’s not looking inside and will only see Alex enter at night and exit in the morning and have her suspicions.

Days Of Our Lives Spoilers – Wendy Shin Is Torn

Since Wendy herself is into Johnny, even though she hasn’t really admitted it to him, she will feel torn about telling Chanel about Allie and Alex. Chanel might break up with Allie and go back to Johnny if she tells, and Wendy will lose her chance with him. On the other hand, she and Chanel have become friends, and Wendy has been stinging with regret that she lost Gabi Hernandez’ (Camila Banus) friendship over keeping secrets.

Keeping a secret to protect her brother Li Shin (Remington Hoffman) seemed to not pay off that well for Wendy, who is short on girlfriends. She might decide that Chanel should know what’s going on, in spite of the risk, after all, Johnny hasn’t exactly made any moves on Wendy!