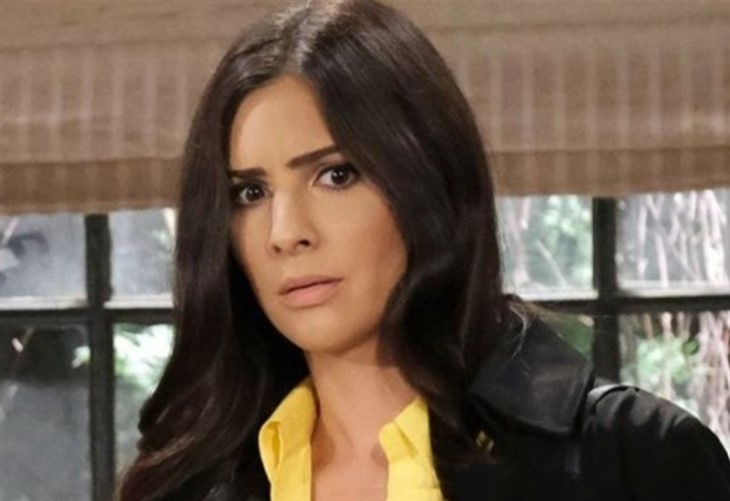 Days of Our Lives spoilers and updates tease that Gabi DiMera (Camila Banus) will knock out Stefan DiMera (Brandon Barash) in an effort to force him to get un-brainwashed. But EJ DiMera (Dan Feurreriegel) is lurking nearby – and Gabi doesn’t want to be seen; can she drag Stefan and hide him somewhere quickly enough?

Gabi’s dressed to the nines in leopard print top, blue skirt and spike heels, it might have been a little easier if she’d worn a track suit and tennis shoes! How’s she going to explain this, Stefan’s out cold and he’s a lot heavier than a sack of potatoes; try one hundred eightyish pounds to her one hundred pounds soaking wet. Gabi is in quite the conundrum since she’s got limited time – Stefan won’t be out cold forever and EJ will spot them if she doesn’t hurry.

Gabi is dragging the unconscious Stefan with all her might, past living room tables, past chairs, desperately trying to get him and herself into the tunnel. Gabi hopes from the tunnel she can get into the so-called secret room and get a blanket to roll him over on and maybe that will be easier.

If Susan Banks (Stacy Haiduk) had been alive and saw what Gabi was struggling with pulling an unconscious Stefan, she might have called him a hunk a hunk a heavy love! He feels like dead weight, but at least Gabi knows he hasn’t up and died on her when he starts moaning and groaning.

Now, that’s all she doesn’t need-Stefan waking up before he’s supposed to and seeing her, because then, he’ll know she’s the culprit who sneaked up from behind and beaned him. Gabi’s end game was for Stefan to fall for her again, but not exactly in that way, flat out on the floor.

According to Days of Our Lives spoilers, Gabi’s end game is to get Stefan to where ever Dr. Wilhelm Rolf (Richard Wharton) is now, to force him to reverse Stefan’s brainwashing. It’s not that Stefan didn’t want to be un-brainwashed; it’s just that he didn’t want to cooperate with Gabi’s timeline for it to be done. Gabi kind of halfway hopes maybe the conk to the head might shake his memories back into his brain, but figures that would be too easy.

Gabi wants Stefan back with her and the two of them remarried as soon as possible; that way not only will she have her love back, but hopefully her job. Then they can run DiMera together like they did before, and hopefully kick old EJ to the curb.