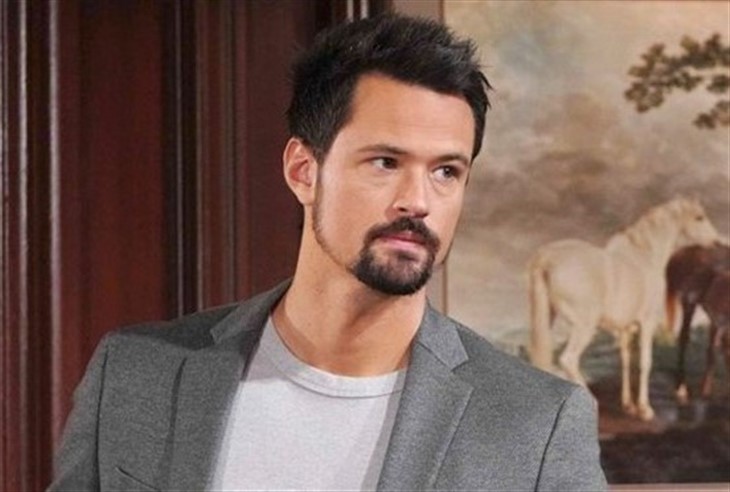 The Bold And The Beautiful spoilers indicate that Thomas Forrester (Matthew Atkinson) is determined to prove himself to Hope Spencer (Annika Noelle) to get his job back. Thomas has been the lead designer for Hope For The Future for some time. Will Hope give Thomas another chance?

The Bold and The Beautiful spoilers reveal that Thomas has done some underhanded things recently, which caused him to lose his job. Thomas hurt Hope’s mother by faking a call to CPS in her name to break up his father’s marriage. Thomas also forced his son to go along with this plan until he told Steffy Forrester (Jacqueline MacInnes Wood) what his father had done.

Hope felt she had no choice but to get rid of Thomas and protect their son from him. After all, Thomas is not being a good father, and Douglas Forrester (Henry Joseph Samiri) deserves better. Unfortunately, Hope and Thomas work well together, and her clothing line may suffer without him. Thomas understands Hope, and that could create a problem.

B&B Spoilers – Zende Forrester Has Been Filling In

Zende Forrester (Delon De Metz) has been filling in as lead designer since the board voted Thomas out of Forrester Creations. However, Zende’s vision may not be the same as Thomas’s, causing issues with Hope’s designs. What will happen if Hope’s idea and Zende’s concept do not match? Will Hope for the future suffer because Thomas is missing?

Thomas should have considered the consequences when he decided to frame Brooke Logan (Katherine Kelly Lang). Thomas’s problem is that he acts impulsively and never considers the consequences. If Thomas had given this a minute’s thought, he would have realized it was a bad idea. Thomas’ immature actions are now affecting the fashion line he loves.

The Bold And The Beautiful – Does Hope Want Thomas Forrester Back?

Hope was extremely upset with Thomas when the CPS issue first happened. However, Hope has had time to calm down and consider her options. Things may not be progressing fast enough with the fashion line to get Hope’s mind at ease. Hope could realize that she needs Thomas, whether she wants to admit that or not.

Will Thomas get a reprieve because Hope needs him? Could Hope, once again, be Thomas’ saving grace? There will likely be some stipulations if Hope allows Thomas to return to work. The Logans nor the Forrester may not be happy with this decision. However, Hope needs someone she can rely on to make her vision work, and so far that has been Thomas.

Days Of Our Lives Spoilers: Gabi Knocks Stefan Out, Can She Get Him Deprogrammed

Should Amy Duggar Bring Her 7 Kids To See Josh In A Dangerous Prison – Regularly?