The Bold And The Beautiful Spoilers: Bill Dumps Sheila At The Altar 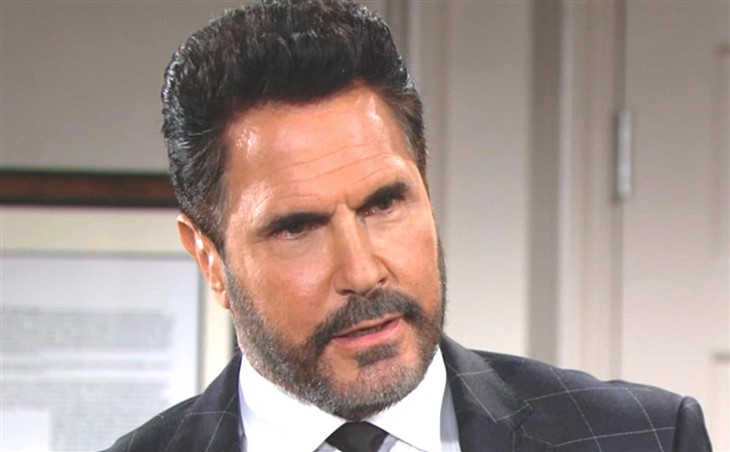 The Bold and the Beautiful (B&B) spoilers tease that Bill Spencer (Don Diamont) will eventually break free from Sheila Carter (Kimberlin Brown). But the B&B spoilers state that he will ask Sheila to marry him, leading to an action-packed wedding upset.

Bill has made it clear to his family and loved ones that he’s dedicated to Sheila. He claims he loves her and wants a future with the homicidal maniac. The good news is Bill will get away from Sheila. But the bad news is it might be a little while before Bill turns his back on Sheila.

Bold and the Beautiful Spoilers– Bill Pledges His Life To Sheila

Bill decides it’s time to make it official with Sheila. Living together is not enough for him. He wants to marry her and give her the life she only dreams of.

The Bold and the Beautiful spoilers say that when his family learns of his plans to make Sheila his bride, they come unglued. They try to convince Bill to change his mind. They think Sheila is using him, and their union will lead to heartache.

Bill won’t care what they think. He wants to spend his life with Sheila. She promised she would never leave Bill. He is ready to have a special someone in his life and forget about the loneliness that he has faced in the past few months.

Eventually, whatever mind-control or drug Sheila uses to control Bill will wear off, and he will come to his senses. We know that it won’t be forever. However, Bill asks Sheila to marry him and walks away just before his wedding.

Perhaps, he listens to his family about Sheila and sees the damage she’s caused in his life. Or Steffy Forrester (Jacqueline MacInnes Wood) succeeds in bringing charges against Sheila.

The problem with using the legal system against Sheila is Bill can afford a high-powered attorney and bribe judges to ensure his girlfriend’s charges will be dropped. So for him to walk away from Sheila has to be on his own accord.

The Bold And The Beautiful Spoilers: Bill Will Deny Brooke, Stands Firm With Sheila