B&B Spoilers: Sheila And Deacon Have It Out 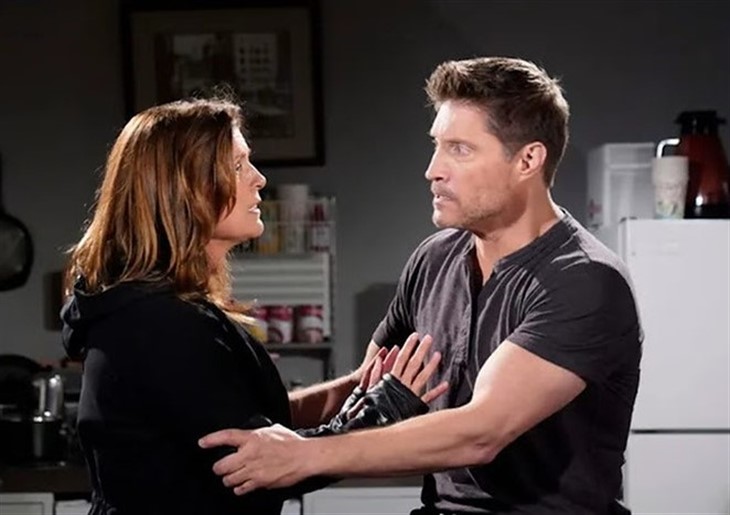 The Bold and the Beautiful (B&B) spoilers for Tuesday, January 24, 2023, reveal Deacon and Sheila coming face to face for the first time since her new Bill adventure.

Deacon Sharpe (Sean Kanan) could hardly believe his ears when Hope Logan Spencer (Annika Noelle) told him what was going on between Sheila Carter (Kimberlin Brown) and Dollar Bill Spencer (Don Diamont). He could show that he was shocked but he could not show Hope how hurt he was because she truly had no idea how close he and Sheila had grown.

After all, Deacon hid Sheila in his apartment for months and risked losing Hope and returning to prison all to keep Sheila safely away from the authorities and this is how Sheila thanks him — by going behind his back and doing a snow job on Bill while she was living with him. He thought they had developed genuine feelings for one another but apparently, that was all a lie.

When Sheila stops by Il Giardino to speak to Deacon on Tuesday, he tells her he is the owner now — and demands to know what the heck is going on and how she really has Bill of all people under her spell.

B&B Spoilers – Hope Logan Gets Back To Fashion

It’s time for the soap to turn some attention back to Forrester Creations and the Hope For The Future Line. With Thomas Forrester (Matthew Atkinson) fired, Hope no longer has a lead designer but she thinks she can pull a few things off by herself.

She was never really successful on her own before and always needed a good designer to back her up because she is mainly an influencer, but that doesn’t mean she isn’t about to give this the old college try. Will Eric Forrester (John McCook) like what he sees from Hope or will it be back to the drawing board for her?

Perhaps Hope will have to admit that she needs Thomas back and find a way to forgive him for his sins. After all, he never sets out to hurt anyone. It just kind of happens that way. Stay tuned to The Bold and the Beautiful weekdays to see how these stories play out.

Y&R Spoilers: Where Are Billy And Chelsea Headed?