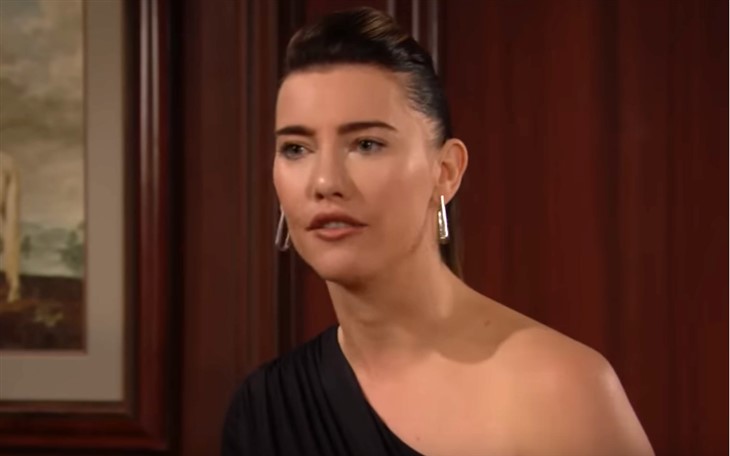 The Bold and the Beautiful (B&B) spoilers for November 28-December 2, 2022, reveal Steffy doing what most people do not expect of her and Sheila doing exactly what is expected of her.

Steffy Forrester Finnegan (Jacqueline MacInnes Wood) has a big decision to make as she watches her parents say vows to one another once again in the Forrester living room. She wants to see Ridge Forrester (Thorsten Kaye) and Taylor Hayes (Krista Allen) happily married again, but not if it’s all based on a lie.

So, Steffy does the right thing and interrupts the wedding, telling Ridge and everyone in attendance that it was Thomas Forrester (Matthew Atkinson) who called CPS on himself and used Douglas Forrester’s (Henry Joseph Samiri) voice-altering app to make it sound like Brooke Logan (Katherine Kelly Lang) did it. Needless to say, Taylor is heartbroken and Ridge is absolutely furious.

Ridge really believed that Thomas had turned over a new leaf and would no longer do manipulative and underhanded things like that. How will he feel knowing Taylor was well aware of what Thomas did and walked down that aisle anyway? All Ridge claims he wants in his life is honesty and Taylor’s actions certainly weren’t honest.

Meanwhile, Brooke is still sad and wallowing in self-pity but at least she has her dad, Stephen Logan (Patrick Duffy), in town to cheer her up. Her sisters, Katie Logan (Heather Tom) and Donna Logan (Jennifer Gareis), are still rallying around her, as well.

Sheila Carter (Kimberlin Brown) is not happy about Brooke’s truly single status at all now that her marriage to Ridge has been annulled and she voices her concerns to Deacon Sharpe (Sean Kannan) in a very Sheila-like way.

Deacon is starting to realize he needs to watch how he acts and what he says around Sheila because she just might be as crazy as everyone had warned him. Did he not know that from the fact that she shot her own son and left him for dead and later cut off her own toe? What does it take for a man to learn? Stay tuned to The Bold and the Beautiful weekdays to see how these stories play out.