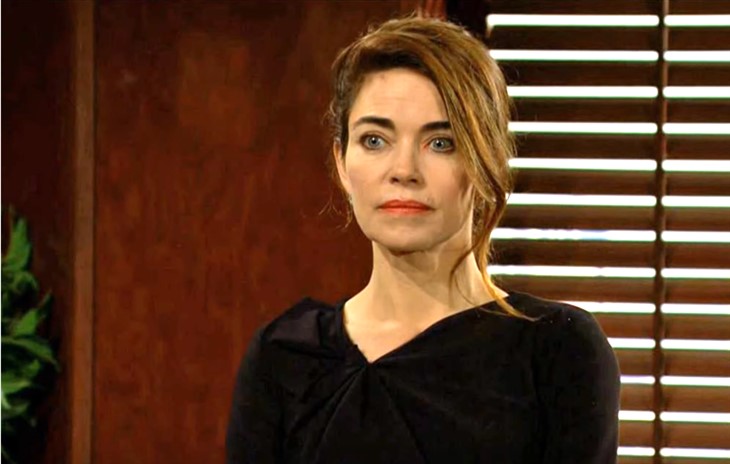 The Young and the Restless spoilers document that Victoria Newman’s (Amelia Heinle) marital problems are not over as she thought. Victoria and her father grossly underestimated Ashland Locke (Robert Newman) and are paying a hard price for doing so.

Victoria was justified in being outraged by Ashland’s betrayals. Victor Newman (Eric Braeden) had every right to offer paternal protection when Ashland wronged his firstborn. And both Newmans had every right to force Ashland out of the company.

However, neither Victoria nor Victoria should have gone beyond what they did. On that point, the Moustache overplayed his revenge hand badly. Even Adam Newman (Mark Grossman) recognized that Ashland was provoked into dangerous territory.

The Young And The Restless Spoilers – Why Did Victoria Newman Let Him In?

The subject header question is applicable to multiple points in the plot. Victoria first let Ashland (as then played by Richard Burgi) in after he first came to Genoa City, Wisconsin.

She waited until his marriage to Tara Locke (Elizabeth Leiner) collapsed and that was on his first wife not Ashland. Victoria was attracted to Ashland’s uniqueness and his difference to Billy Abbott (Jason Thompson), among other traits.

Victoria intentionally let Ashland back in as part of her bait and switch plan. She wanted to teach him a lesson in New York and succeeded. But to let him into her home was a mistake that made no sense.

Billy, who has become far more responsible that Victoria ever thought possible, told Nick Newman (Joshua Morrow) to check on Victoria. Thankfully for her, Billy did that.

There is no way to know what would have happened if Nick did not force his way into Victoria’s house through the back double doors. Ashland was in an enraged state, felt he had nothing to lose, and pronounced that he was going to end things within the fifteen-minute time frame Victoria gave for her security team arriving.

Of course, Nick rang her cell phone, not the security team. Morrow’s character proved to be Victoria’s protector and possibly, Ashland’s accidental killer.

Michael Muhney’s (Adam) version of this character used to derisively refer to Victor as pops. Grossman’s edition had been getting along reasonably well with dear old dad until Victor recently allowed Victoria to take back the Chief Executive Officer’s title.

Adam has been proven right about Victoria letting Ashland in the back door and about Victor’s conclusions. Braeden’s character is once again distracted by non-business interests, with his chosen CEO forced to focus on messy personal matters that involve Ashland on Y&R. This particular distraction, meaning Ashland’s assumed death, is trending toward serious legal and business implications.