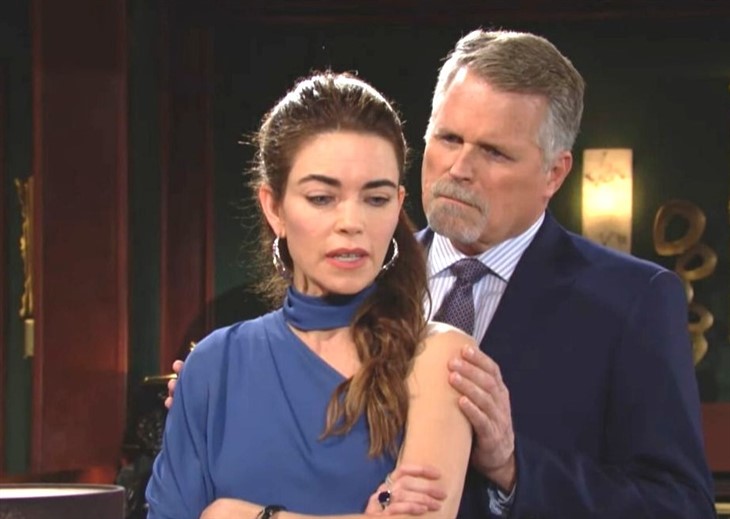 The Young and the Restless spoilers document that Victoria Newman Locke (Amelia Heinle) is clearly not over her husband. Ashland Locke’s (Robert Newman) feat of bravery confirms that he is in love with her.

It was reasonable to question whether Ashland ever had any feelings for Victoria. His horrible behavior and actions led his wife to conclude that Ashland used her to further a business agenda.

But this story line is complex. As has recently been revealed, Ashland started his ploy intending to dupe Victoria so she would push his merger plan. But then something unexpected happened.

As devoted viewers recall, Ashland’s behavior strongly indicated that he began to fall in love with Victoria when the character was played by Richard Burgi (Ashland). The initial edition of this persona was starry-eyed when asking Victoria to dinner while still married to Tara Locke (Elizabeth Leiner). That was long before he learned about Harrison Locke’s (Kellen Enriquez) paternity.

So, there is a time line problem in having Ashland say that he developed feelings of love for Victoria after his merger plot was well underway. Continuity is important, with consideration given as well.

As for Ashland lying about cancer, what physical problems was he having while suffering distress on various occasions over the course of various months beyond his heart attack? That point has not be clarified, with viewers left to assume that stress and his weakened ticker were the possible causes.

Victor Newman (Eric Braeden) offered a classic back-handed compliment when telling Ashland that he was grateful Victoria was pulled from her burning car. But the Moustache followed by saying Ashland was responsible for Victoria being on the highway where the accident happened and was the cause of Rey Rosales’ (Jordi Vilasuso) death.

Ashland stood toe-to-toe with Victor and outwitted him. The love Ashland cites for Victoria is why he is refusing to leave Genoa City, Wisconsin, as Victor demands he does.

The Young And The Restless Spoilers – The Road Ahead Includes Recoupling?

If Victoria and Ashland get back together, they will enter what would be a new kind of relationship. That is what Ashland believed Victoria was doing when she agreed to leave town with him before acknowledging she duped him.

It seems more likely that Victoria will give Ashland another chance based on him saving her life. She has the needed proof to know that he has changed. So, the question will be if Ashland can maintain his new approach to life while also avoiding whatever punishment Victor may doll out for refusing to leave GC as he ordered?